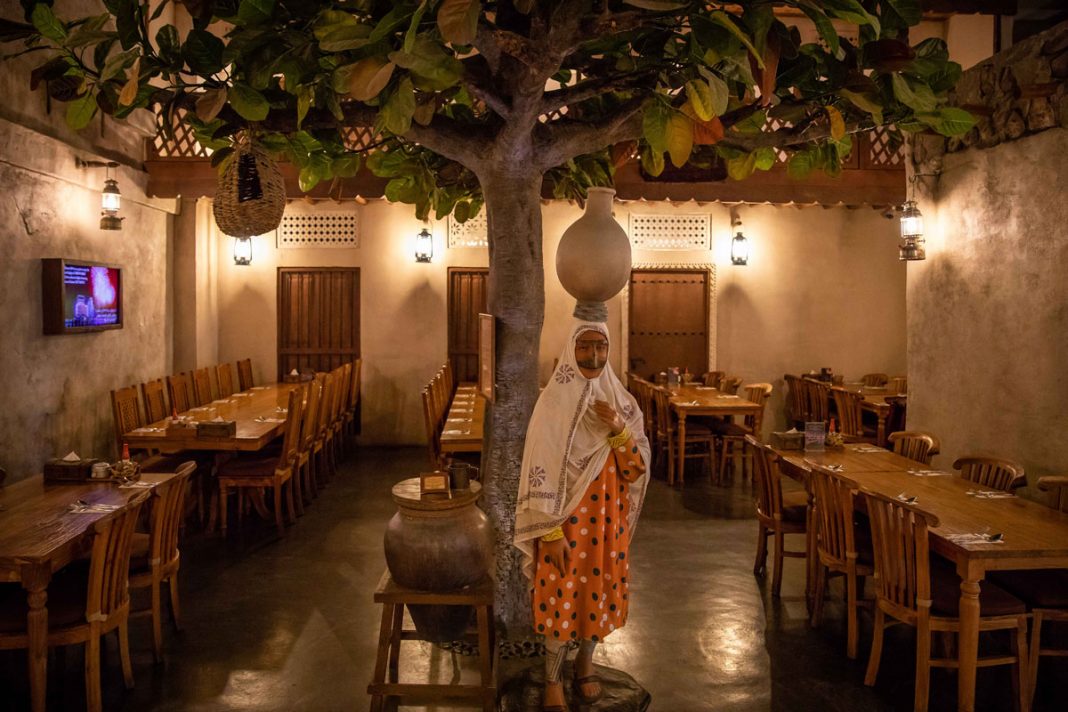 Dubai has become a center of diversity over time due to its accommodation of expatriates and the ease of settling down of foreigners into the local community. With the diverse population comes diversity in behaviors and habits, cultures and traditions, including food among other basics that make up human life.

The rise in the number of expats in Dubai has invariably led to a rise in the number of businesses established to cater for this diverse population providing for them options of their own native foods among other things. This is the major reason behind the proliferation of international food brands and international cuisine restaurants in the city.

However, the inevitable change over the cause of civilization and development has not derailed Arabians from what is essentially their own. Although, at a period in time, the making and consumption of traditional Emirati foods were relegated to homes, a shift in paradigm has allowed for the dishes peculiar to the natives of the Emirates to thrive among locals and foreigners, paving a way for them to gain ground in the business of commercial sale of food.

Below are some of those restaurants where you can get to eat the best traditional Emirati food in Dubai.

One of the most popular spots for traditional Emirati meals, Al Fanar Restaurant & Café has multiple branches scattered around the UAE. The food is as good as they come and is rated well among tourists as well as residents. The interior is decorated to reflect the inside of a traditional Emirati house. With the homey atmosphere, you can enjoy home-style favorites such as maleh (salt-cured fish) and naghar mashwi (spiced grilled squid). You can also opt for chicken machboos (a bezar-spiced rice dish) or tender naghar mashwi (grilled squid). If you are not near the Festival City Mall, there is another branche in Al Seef, and a new branch coming soon to Al Barsha Park .

Named after the seven emirates, this restaurant is decorated in bold Arabian aesthetic and general Middle Eastern undertones. The restaurant serves mouth-watering traditional Emirati dishes such as fish fouga served with fragrant rice and lamb shank. There is also a variety of dishes from other regions such as Sambousas; a likeness of Indian samosas given a bezar spice twist, prawn fouga flavoured with bezar, saffron, and kibbeh (meat-filled cracked wheat croquettes).

If you love making food and not just eating them, you can sign up for a two-hour cooking class, which holds every Tuesday morning and evening and learn how to make three authentic courses. It is located at the Beach at JBR and features cozy interiors with breezy terrace overlooking the sea.

Logma gives a perfect blend of traditional and modern with its modern interiors and traditional cuisines. The eatery has funky camel motifs and kerosene lamps hanging, topped with all the usual Emirati fare. Their meals include khameer flatbread stuffed with fillings such as chicken tikka or filled with the traditional cream cheese and dibs (date syrup). You should also enjoy the fries seasoned with Middle Eastern spices which Logma is famously known for. Logma is located in Boxpark – Al Wasl Road, Fashion Avenue –
The Dubai Mall, and City Center Mirdif.

If you want to have a taste of traditional Emirati foods as well as know the history behind each cuisine, Sheikh Mohammed Centre for Cultural Understanding is your place to go. It is located in the Al Fahidi Historical Neighborhood by the Dubai Creek and has volunteers ready to answer any questions about the culture and cuisine of the Arabian people. While you’re learning, make sure to enjoy traditional dishes such as chicken machboos and delicious luqaimat (doughnuts) drizzled in dibs.

One of the fun facts about Al Bait Al Qadeem Emirati Heritage Restaurant is the fact that its building was originally constructed in 1909 and owned by Mr. Abdulla Bin Jamaan, who was the possessor of pearl diving boats, who also worked as a guardman for Sheikh Rashid Bin Saeed Al Maktoom, then he became the first director of Dubai Municipality in 1954 A.D. The restaurant is located in the historic Al Ras area in Dubai where you can smell and feel the history of the city. Their menu includes a variety of local and Arabic dishes in addition to a selection of famous Persian and Indian cuisines.

The traditional restaurant is located at Souk Al Bahar in Downtown Dubai and is classic in all its glory of imposing arches, horse sculptures and Arabic calligraphy combined together to give an Arabian Nights-style ambience. The give a modern touch to traditional dishes such as warm date with kale salad; chicken biryani, served in a flatbread parcel; lobster kibbeh (stuffed savoury dough balls) and mouhalabiya, served with honey.

This popular restaurant is located at the busy Dubai Mall and serves classic traditional meals in their utterly modern setting. The warm wood interiors and iPad provided to peruse the menu should not distract you from the amazing cumin-sprinkled dangaw (boiled chickpeas) and steaming khameer flatbread with Arabic coffee brewed with cardamom. There is usually an endless supply of fresh dates and the signature mbahar deyay (chicken in a spicy cream sauce with saffron-infused rice) is to die for.

Aseelah is known for exceptional traditional Emirati dishes such as thareed (lamb and vegetable stew), aseeda bobar (pumpkin pudding), and prawns marinated in bezar and a touch of modernity with dishes such as camel sliders with date jam. It is beautifully decorated to give a comfy feeling while you enjoy your meal. It tops it all with creative cocktails, booze and a fair-priced wine list. It is a very popular spot located at Radison Blue Hotels in Dubai Deira Creek.

The Bedouins of traditional Dubai society are known for their cattle and food made from cattle produce. Some of their staple foods include camel milk, yoghurt made from camel milk and other forms of consuming camel milk. The Majlis at Dubai Mall specializes in this aspect of traditional Emirati meals. Their camelccino made with a blend of Ethiopian beans, pistachio-glazed éclair and camel milk is a classic one you have to taste. They also make coffee, cakes, shakes and ice cream made from camel milk, paying obeisance to the ancient nomads. The meals give it all as they are lower in fat and higher in vitamins and minerals than the cow equivalent.

This is one restaurant that provides you with a variety of budget-friendly options. You can have the luqaimat served with karak (strong tea) or have a pick of the Arabic breads which you can have plain or with fillings like cheese or potato chips. Karak and Rigag is located near Hamriya Port, Mamzar, Dubai.