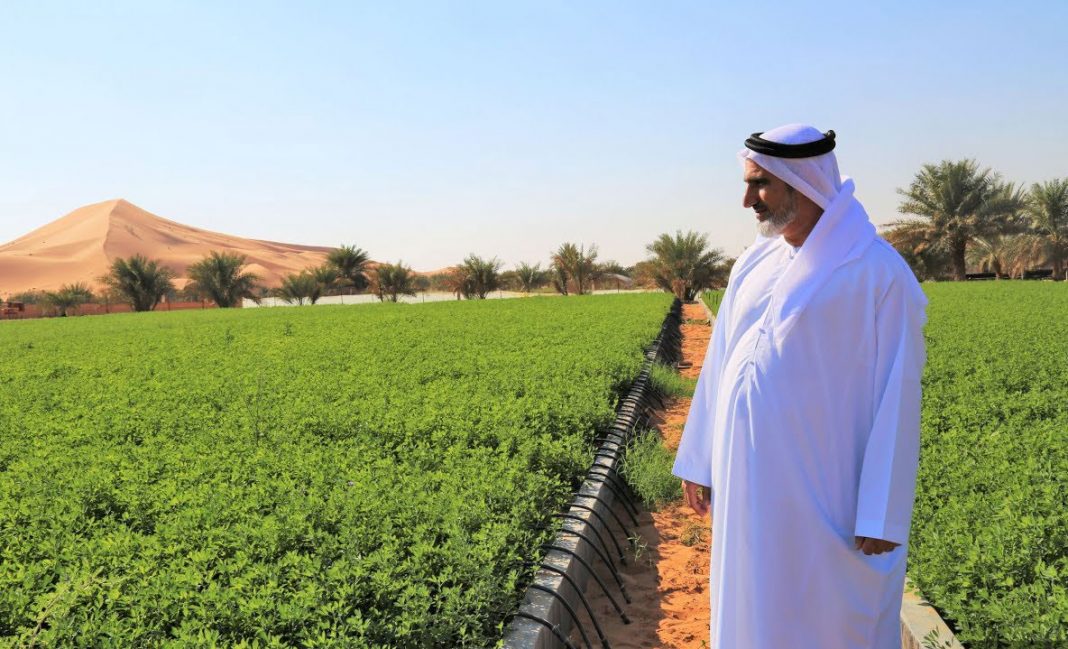 With the world set to increase its population by two billion before 2050, the race to ensure that this tremendous population will not suffer has since begun with various international organisations coming up with different ideas, programs and campaigns in order to ensure that the population of the world is catered for. With 9 billion humans on earth, the fight for sustenance and survival will no doubt become tougher.

The strain of the world’s population is already being felt through climate change and continuous decrease in some vital natural resources. One of the greatest sources of concern is on production of food. Being a basic human necessity, every country strives towards ensuring that its people have enough to eat lest, it becomes a source of worry for the government. With every country coming up with diverse ideas and policies to ensure that agriculture prospers in their land, the United Arab Emirates is not set behind.

Below are some interesting facts about agriculture in the United Arab Emirates.

The Masdar Institute launched a Seawater Energy and Agriculture System pilot project in 2015 which was aimed at preserving the environment while catering for the sustenance of the populace. The project is an idea whereby the waste products from the shrimps and fishes bred through the sea-water aquaculture facilities are used as fertilizers for plants in a mangrove swamp. The plants from this swamp are then used as fuel for Abu Dhabi airline Etihad Airways.

2. The government is wholly into the industry

The agricultural industry of the United Arab Emirate is dominated by private individuals who thrive with the aid the government provides. The government of the UAE has always been involved in the agricultural sector through the provision of incentives to ensure that there are always people involved in the sector and to ensure that these people do not suffer. From 1970 to 1988, the number of the number of farmers increased from 4000 to 18265. The government provides fishermen with specialized technology and equipment. Farmers are aided with subsidized machinery, seeds, fertilizers as well as access to free preparation of land for agriculture.

3. Foreigners are not allowed in the fish business

As a country that welcomes expats with open arms, the United Arab Emirates lives off of foreigners as much as they live off their resources. Tourism is the second most important source of income for the country after oil. The money foreigners spend while visiting, the capital invested by foreign companies, partnerships with other countries all generate income for the Emirates but the fishing industry is off-bounds to foreigners without the participation of local fishermen; foreigners are not allowed to export fishes from the UAE, only local fishermen with permits can do so. So, if you’re thinking of investing in fishery in the Emirates, be prepared to deal with the rules and bureaucracy.

5. Roses are cultivated for export

The UAE is not so preoccupied with food not to cater for the beauty of nature. Roses and chrysanthemums are cultivated, not for consumption, but for export to Europe. Not every bunch is shipped abroad though, so do not despair if you’re planning a romantic getaway and you think all roses are foreign-bound. There are still enough to go around.

6. You don’t need soil to grow crops in the UAE

Being a desert country, the United Arab Emirates governments have always looked for ways to increase the food production in the country. Poor soil and harsh summer temperatures have made the country switch to the use of technology in order to grow crops. The hydroponic farming system is the rave; whereby plants are grown without soil using a liquid nutrient solution. This method is becoming increasingly popular as it saves water, conserves land and brings farmers closer to the consumers.

The use of technology in the agricultural sector of the United Arab Emirates transcends the usual common in other countries of the world. In other to ensure that the available resources are utilized in ways that ensure effectiveness and sustainability, the United Arab Emirates governments have taken to utilizing technological devices such as drones in other to help farmers make better and informed decisions in their farming. Drones are used to measure plants hydration so as to ensure that plants do not get too much or too little water. They are also used to monitor the health of crops, the level of maturity and to count crops. Yes, you read that right. Drones can be used to count individual crops by zooming down to the square inch which allows for the seemingly impossible feat.

8. Vegetables and fruits are more important to the economy than food crops

The vegetables and fruits market was valued at $3.731 million in 2018 and is expected to double between 2019 and 2024. While the demand for olive and its product such as olive oil is on rapid increase among citizens, an estimated compound annual growth rate of 36.9% is expected within the next five years. Other vegetables such as garlic, onion, and tomato have made their impacts in export to other countries in the Arabian Peninsula and countries in Africa.

In the largest UAE city, Dubai, fish business is a serious one. The city’s fish market is located on the quay in Deira, adjacent the Al Shindagha tunnel. This is where you can get to purchase sea foods such as crabs, shrimps, mackerels, and even sharks. According to statistics, 500 tons of seafood passes through the market every day. This is not just from products of the local waters but also products of other countries such as Thai tuna, Canadian scallops and Norwegian salmon.

10. Dates are iconic in the UAE

The production of dates is important to the economy of the United Arab Emirates as it is of symbolic value to the nation. Without regards to the millions of dollars the fruit brings to the economy every year, dates are as important as other national symbols such as the falcon, the Arabian oryx and the dhow. There is even an annual festival organised to celebrate the importance of dates. The festival, known as Liwa festival runs from 18th to 28th of July, every year. The festival is used to celebrate the Emirati heritage and spread the awareness on the importance of dates.