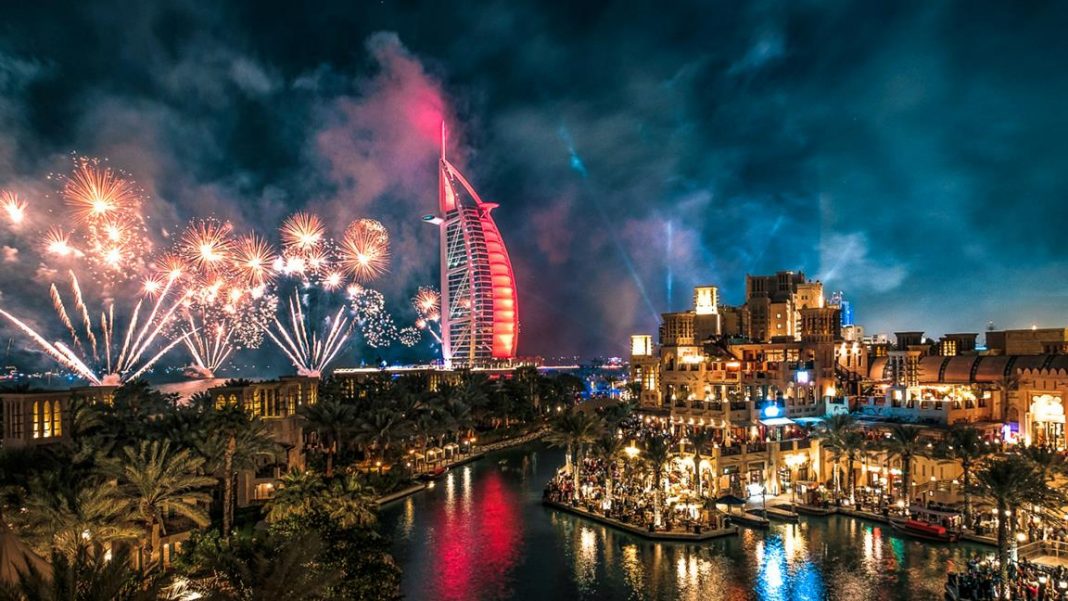 The New Year’s Eve is a period of celebration as much as the New Year day itself, and the entire UAE undergo a magnificent transformation during this period. The New Year is a period when all workers are given a special break or time off to celebrate with their families and friends, while people who have enjoyed their way through the year seal their fabulous year with a blast and sizzle into the New Year with a vibe.

The city of Dubai has always been known for its glitz and glamour and the ability to give that special effect to anything it lays its hands on. The beauty of Dubai is only further accentuated by the special effects of Christmas and New Year decorations which make the stars glimmer a thousand times more.

If you’re in Dubai and you’re planning on how to celebrate the New Year’s Eve and especially, where to get the best experience and adventure while doing so, you will find this list useful as it seeks to take you through some of the best places in Dubai to celebrate NYE. These places range from dining restaurants to party halls to relaxation lounges among others. 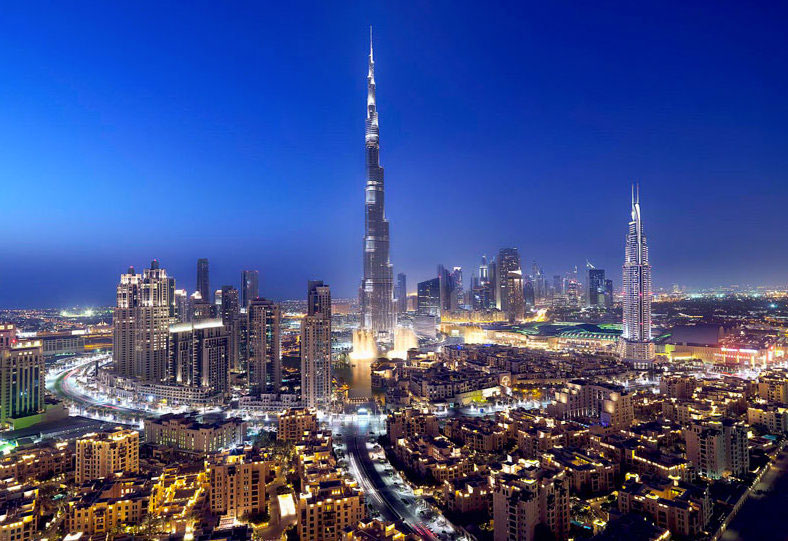 The city of gold is known by many on the outside as that city with lots of millionaires and extremely rich people who can afford to have three meals per day in a seven-star hotel. However, this is not so as the Dubai community also consist of the average and the not-so average individuals and families who do not tile their homes in gold. These sections of the population are not left behind while the celebration of the New Year’s Eve and New Year is ongoing. Downtown Dubai is where you can find some of these people a day to the New Year and the experiences there is also worthy of mention. From this place, you have a view of the Burj Khalifa and the streets are full of music and dance till the New Year enters fully and bid everyone good morning. This is also a great place to get a glimpse of the magnificent fireworks that goes off on the Burj Khalifa at 00:00 into January 1. 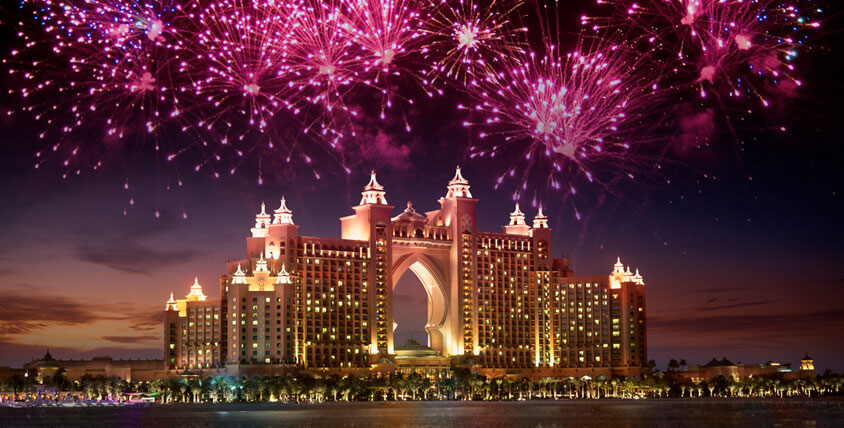 Like the rest of its siblings, Atlantis, The Palm has been popular among residents of Dubai for being a prime spot of celebration during the New Year festivities as with many other forms of festivities. The offerings of this classic hotel include restaurant that serve food from award-winning chefs to the live music provided for the occasion of the New Year Eve. There is an avenue to go all sentiment and enjoy a dance or two with your partner while you stare at the clock counting the minutes down before it starts the count up again. The fireworks are of course, stellar. 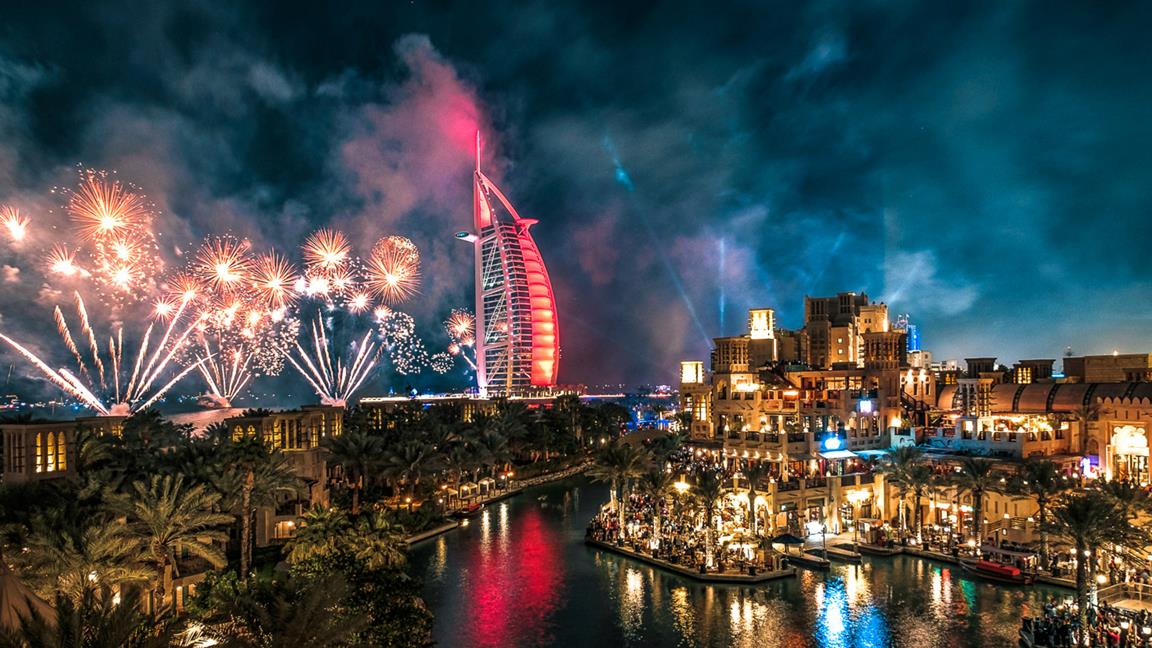 Madinat Jumeirah is favored, probably as a result of the diversity it offers in the restaurants available for people. Bordering Burj Al Arab, Madinat Jumeirah has become a spot on its own rivaling others for the attention of the party-going, enjoyment-loving portion of the Dubai populace. Almost every restaurant and hotel is opened for this day when people take the time to enjoy what they had been missing out on during the year. These restaurants have however gained no point on Madinat Jumeirah with the host of restaurants that focus on different foods such as Thai, Asian, Italian and American. The fireworks are to be expected and never disappoints. 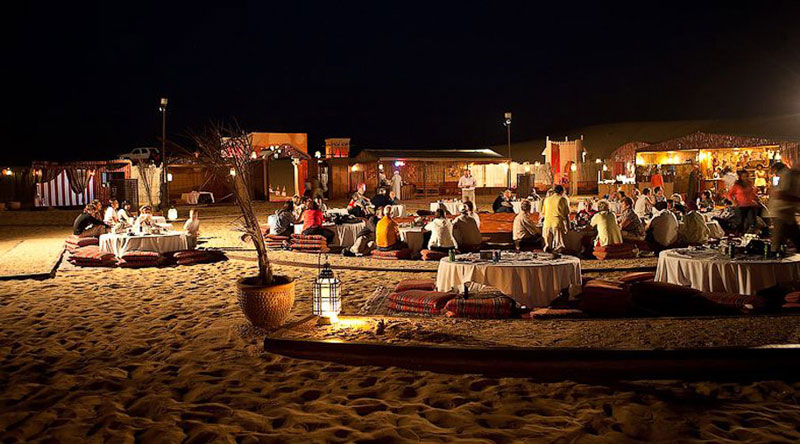 Dubai is a city of more desert than there is green land. It is only expected that a forward thinking state will make use of what they have in order to protect it from just lying redundant. The safari desert is an exciting place to end a year and welcome the new one. This idea has already found a home in the Emiratis and you can see locals packing off to the sand dunes to spend their holidays in campsites where you can watch the sun set and kick back to relax. There is usually the prevalence of music, accompanied by extravagant dishes, fireworks among the lots. 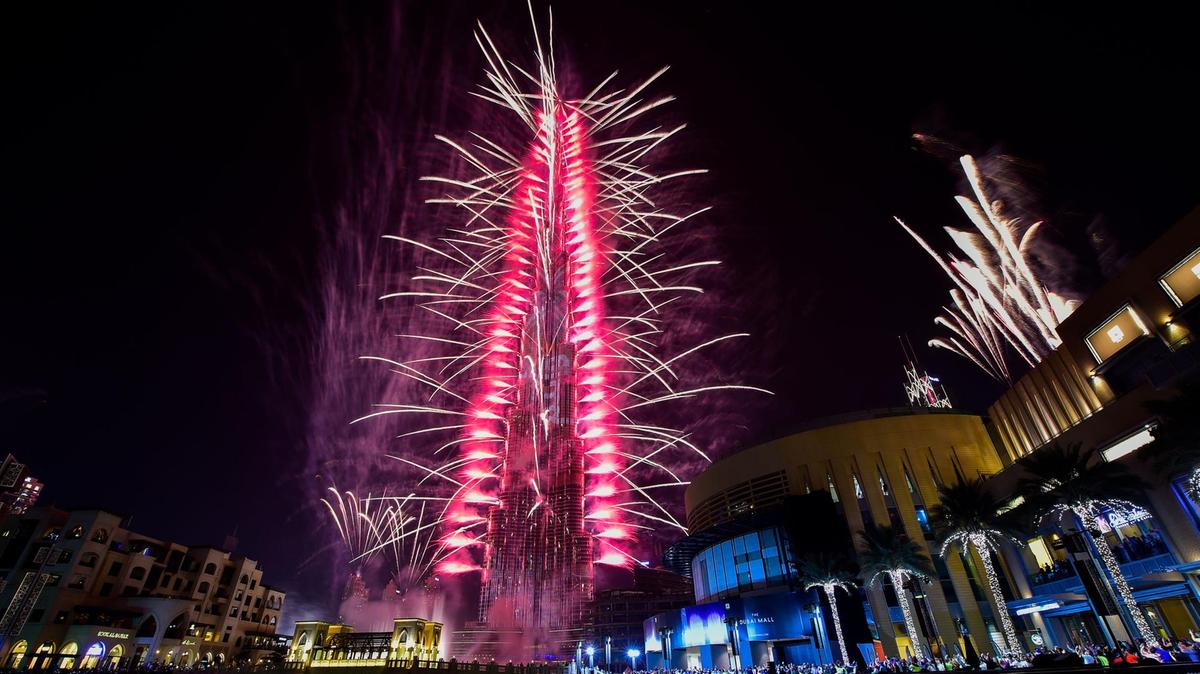 Burj Khalifa is known for its fireworks and decorations during the festivities. The adjacent Dubai Fountain as well as the lights gives the location a special look that draws in the celebrating populace. There are usually live performances, DJs and of course fireworks to celebrate the coming of a New January. 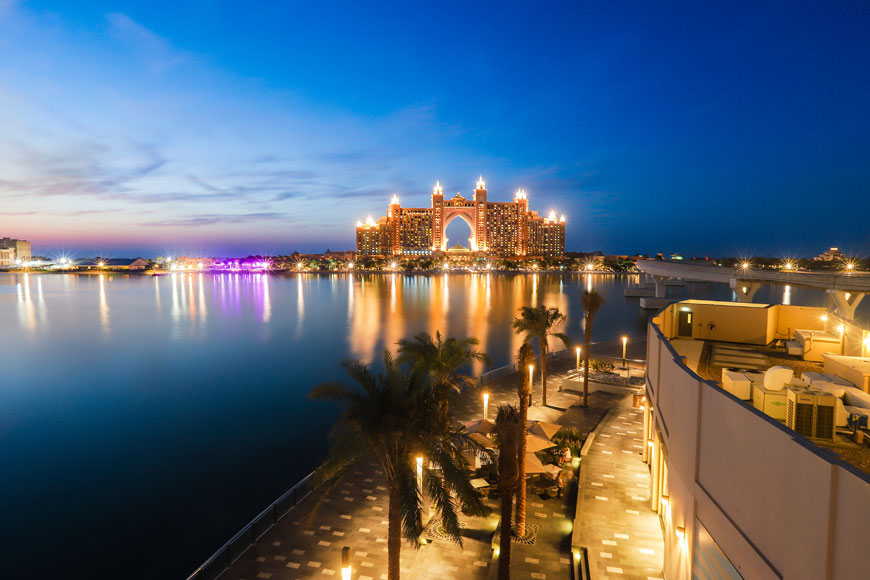 The view of the Atlantis provided from The Pointe makes it a favorite spot to celebrate New Year’s Eve. The Pointe has more than 80 shops, restaurants, cafes and other attractions for people who wish to enter into the New Year from the cocoon of one of its facilities. Most of these facilities are free to access except the restaurants that require advance booking. 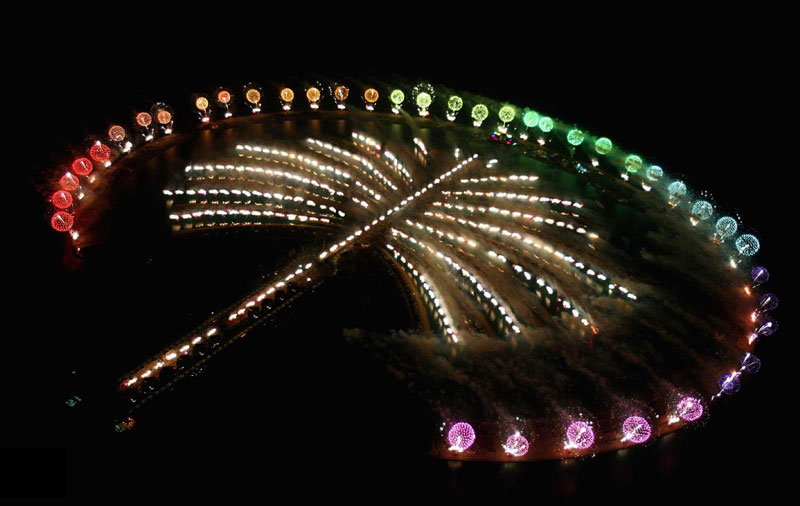 Palm Jumeirah and its 11 km boardwalk have been ranked as one of the best places to celebrate New Year’s Eve. The several hotels as well as luxury apartments that are on the Palm Jumeirah all have special viewing spots for the fireworks that qualified the Dubai city  for NYE celebrations. The restaurants around provide amazing dishes and there are also clubs and lounges for the party lovers to jiggle into the New Year. 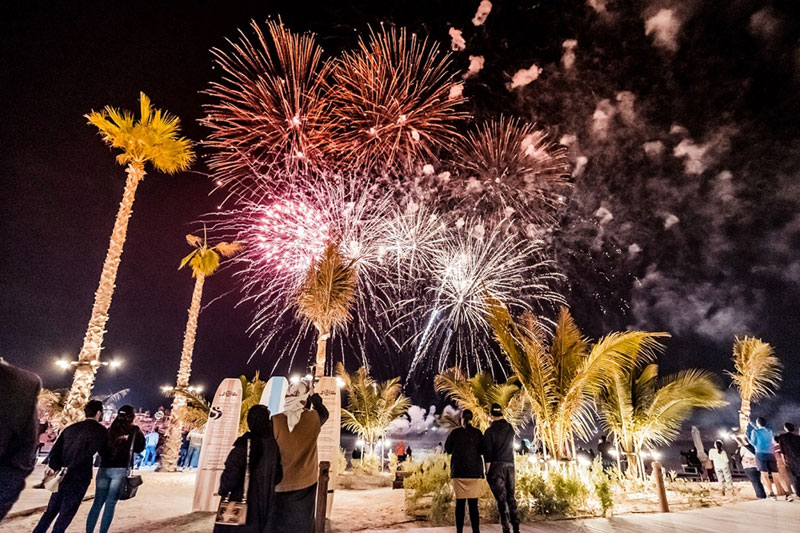 La Mer is one spot that is guaranteed to make your NYE experience a memorable one. You can celebrate the New Year’s Eve by watching the fireworks light up the sky above the waterfront from this beachfront, and before that you can treat yourself and your family to some great meals at the numerous restaurants around. 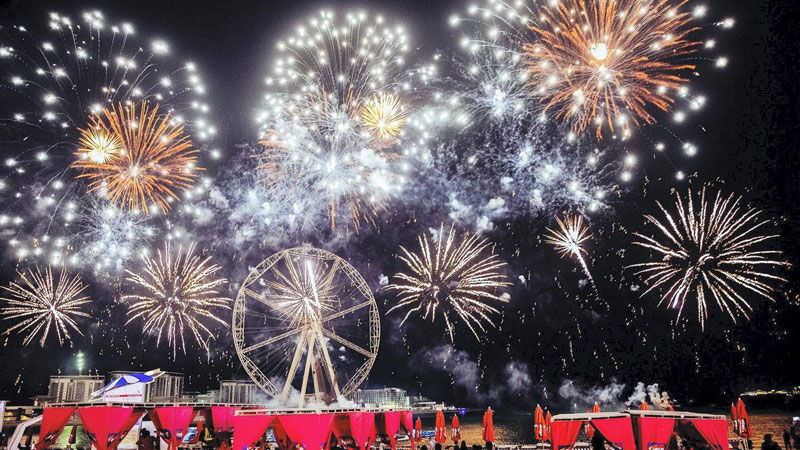 The Beach, JBR is another awesome place to view the amazing show of fireworks for the NYE. Being a prime viewing spot in the city, it is advisable to get there early so as to get a good spot to enjoy the show as many residents as well as tourists would find their ways down to the destination that day. 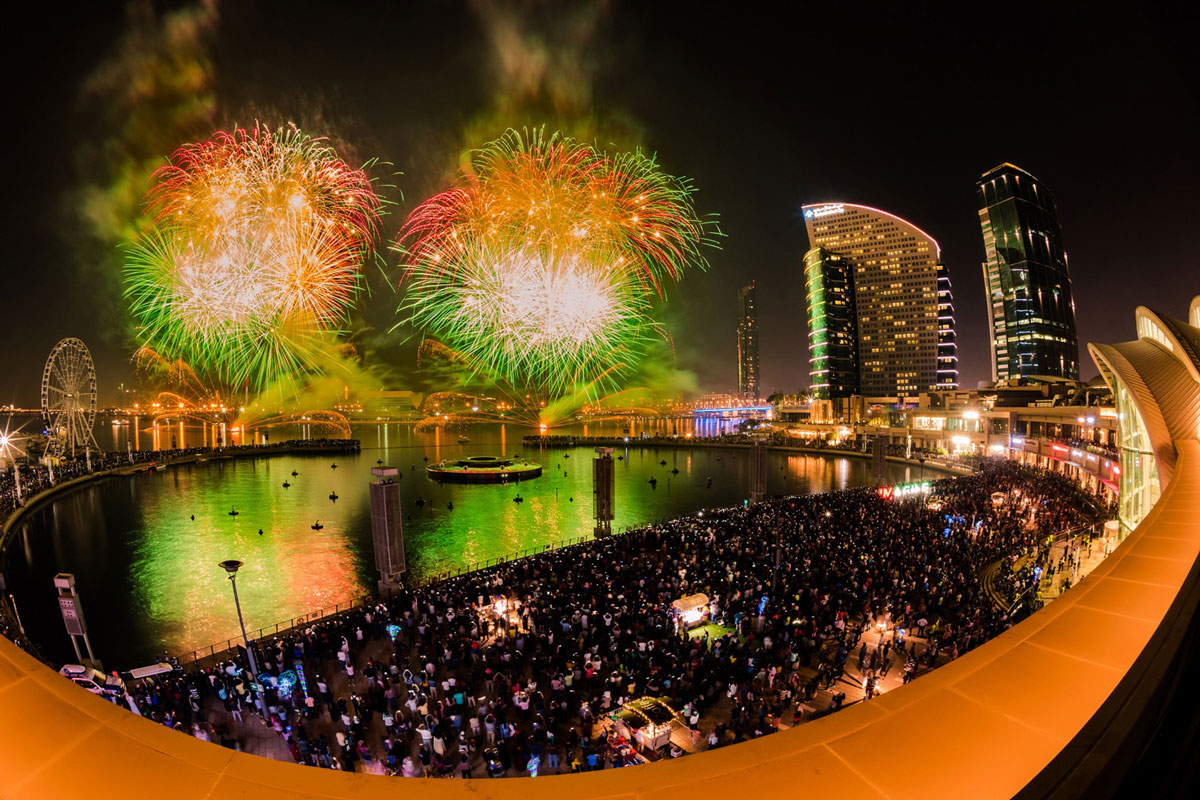 The iconic Dubai Festival City Mall will not only glow with the effects of the fireworks show it religiously hold every New Year’s Eve, but also with the glitz of the special IMAGINE water and light show to ring in 2020. Ensure you get there early and reserve tables in advance though, to avoid any disappointments.

The Global Village remains one of the best places to celebrate special events in city, and the New Year’s Eve is not left out. The fireworks in this spot remains exceptional and the plethora of activities to do and food makes it even more worthwhile.

Just as a complimentary mention, the Kite Beach is a cool spot to celebrate the New Year’s Eve with your loved one. It is a public beach right next to Burj Al Arab and is perfect for a New Year Eve picnic on the sand. All you have to do is to get there early so as to get good spots.