Gulf Takeout
Home Lifestyle Travel Qasr Al Watan: Everything You Should Know about it and Why You... 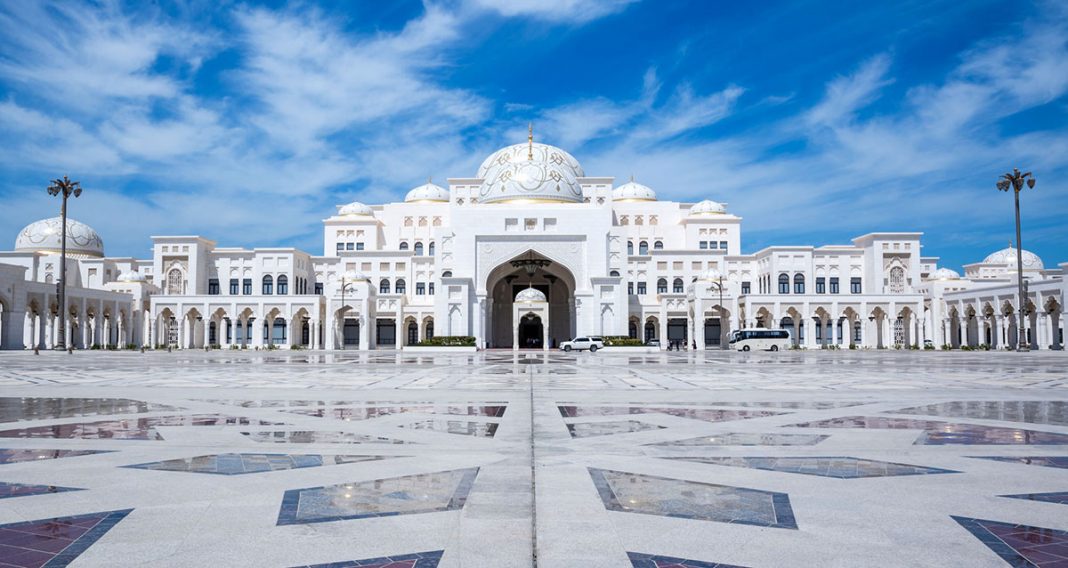 Qasr Al Watan translates to “Palace of the Nation” in English, and it is the Presidential palace situated in Abu Dhabi, United Arab Emirates. Meetings of the UAE supreme council and federal cabinet hold in this palace, and it is also used to host foreign dignitaries. It used to be an exclusive place for these state functions until it was opened to the public on March 11, 2019. Since then, it has become a tourist attraction and one of the best places to visit while in Abu Dhabi. It now combines the official purposes with serving as a means of showcasing the UAE’s rich history to the world while serving as a hub of knowledge.

Qasr Al Watan is a palace from the fairyland as visitors that have taken the opportunity now afforded the public have confessed to the feelings they got from visiting the majestic edifice.

The vast dome which measures 37 meters in diameter, as well as the glittering chandelier with 350,000 pieces of crystals embedded in the building, all give it a magnificent outlook which literally drops the jaws of viewers. From the outside, the building is mostly decked-out in white with intricate gold designs and ornate decorations around the domes and pillars. The floor is laid with marble which gleams at all time of the day. The interior is laid in gold, marble and crystal that redefine opulence and luxury. 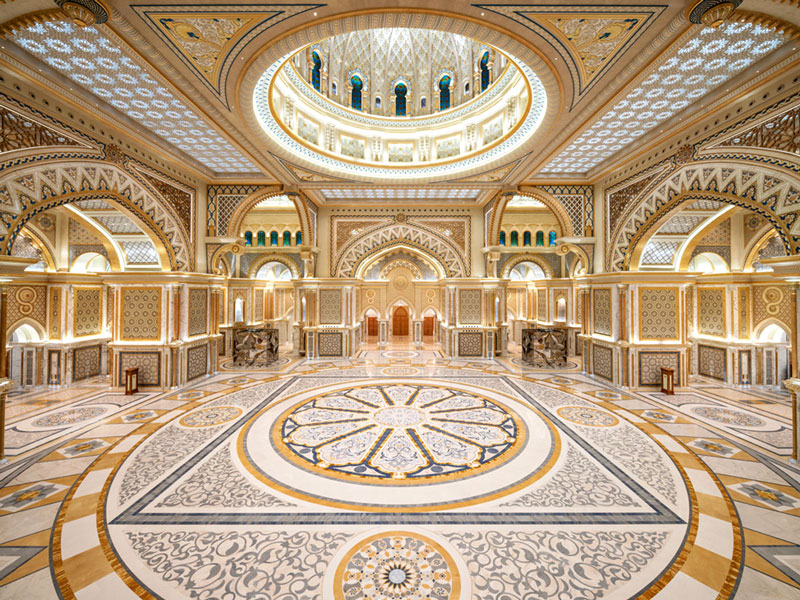 1. The main dome in The Great Hall is one of the largest in the world

To start with, the main dome is located in The Great Hall, which is definitely the highlight of a tourist visit to Qasr Al Watan with four art installations, mirrored cubes to reflect the designs in the hall and the dome which takes all breath away from a viewer. The dome measures 100 meters in length as well as 100 meters in width. The diameter is 37 meters (221 feet), making it one of the largest in the world. Within this grand space, visitors will gain a deeper appreciation of the region’s architectural and artistic legacy. From the central dome and archways to the ornamentation and mosaic patterns.

Qasr Al Watan is open to visitors from 10am to 8pm daily and has been available for sightseeing since it was opened up to the public. Tickets are available on arrival and can also be bought online to ease the purchase. The standard ticket for the palace and gardens costs Dh60 for adults, Dh30 for children between 4 and 17 years old while those below four get to enter for free. A garden only ticket which gives access to the grounds and visitor centre costs Dh25 for adults and Dh12 for minors. It costs an extra Dh30 for a guided tour. Valet parking is available at the visitor’s center every day from 9:30am to 9:30pm for a charge of Dh80, but you can also park for free on site as there is a large parking area available.

3. What to wear to the Presidential Palace

4. The palace features an array of dining options

A visit to Qasr Al Watan is not complete until you get the dining experience from any of the available spots on the palace grounds. Qasr Al Watan features an array of dining options. Start your journey in “Al Fowala”, a relaxed and elegant lounge serving a range of coffees, teas, patisseries and Arabic sweets. Round it off in “Dhiyafat Qasr al Watan” with a selection of light meals and sharing dishes overlooking the Palace courtyard. Additionally, “Legma” is located at the visitor center and main Palace exit offering a selection of light snacks and beverages.

5. You can take pictures, but there is a limit

Tourists are allowed to take pictures and videos in and of most part of Qasr Al Watan with only some exceptions. Taking pictures or videos of security staff and security systems in the palace or on the palace grounds is prohibited. This single exception is justified since it is important to note that the formal offices of the UAE’s President and Vice President as well as the Crown Prince of Abu Dhabi are here. This is for safety as much as bureaucracy as the palace host dignitaries often and serve as the official meeting place of the Emirates.

Why you should visit Qasr Al Watan 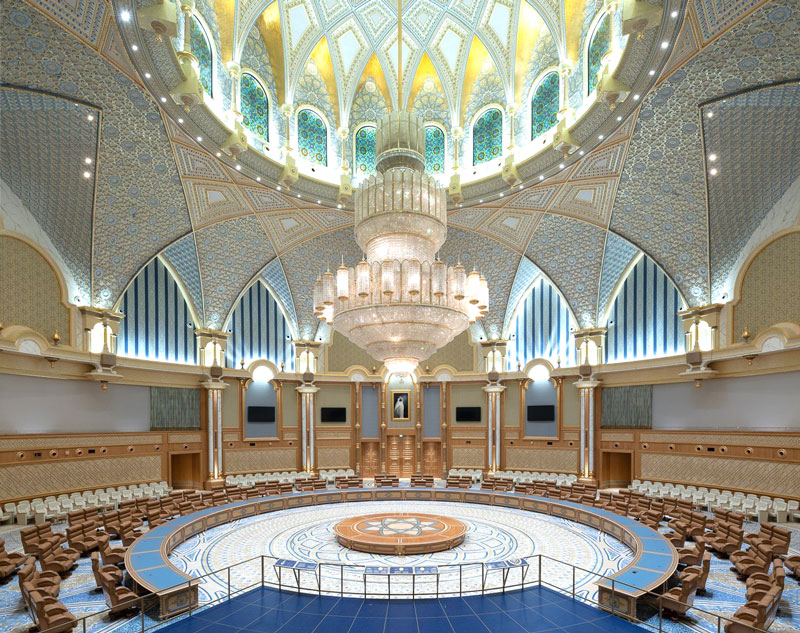 1. It gives an insight into a part of the country that has been locked out from outsiders over the years

From the exploration of the collection of gifts signifying a legacy of good will between the United Arab Emirates and the world, to the discovery of how the UAE leaders host the world’s leading dignitaries with a unique taste of Emirati hospitality in the Presidential Banquet, and more, Qasr Al Watan gives an insight into a part of the nation that isn’t known by most people.

2. It is one of the best places to learn about the culture and history of the UAE

Due to the fundamental role this palace plays in the governance of the country, it has accumulated the history of the country both in prints and in artifact, which are mostly allowed to be viewed by visitors since the palace was opened. Visitors can experience the awestruck feeling most get when they enter the palace for the first time, starting their tour from the Grand Hall to the Majlis, to the “spirit of collaboration” hall, where several decisions concerning the Emirates, the Arab League, and the Organisation of Islamic Cooperation has been made. You will also be availed a view of the collection of gifts that have been received from foreign dignitaries over the years such as the carpets from Turkmenistan, a sword and shield from Kazakhstan, jewelries from several countries among other gifts.

3. You get a chance to see The House of Knowledge and the Qasr Al Watan Library

Both parts of the Qasr Al Watan are importance sources of knowledge and hold documentations of Arab contribution to various fields including science, arts and literature. The House of Knowledge houses a vast selection of rare artifacts and manuscripts including a copy of the Qur’an, the Bible and the book of David’s Psalms which are displayed together as a symbol of peaceful co-existence in the UAE. The Qasr Al Watan Library has over 50,000 books on the nation’s cultural, social and political history. There is also a digital collection which has more than 16 million materials.

4. You get to reflect inside the Al Barza Majlis

A “Majlis” is usually a place for welcoming guests and leaders also use it for a variety of other functions such as holding committee meetings, consulting the people about government policies before they are made and is sometimes used to pray or reflect. Al Barza Majlis is the largest room in Qasr Al Watan after the Great Hall. It is used to formally welcome guests and can accommodate up to 300 guests.

5. Experience the “Palace in Motion” show

Worthy of note is the fact that if you are lucky to be around the palace by 7:30pm, you will get to experience the breathtaking “Palace in Motion” show. It is a 15-minute show whereby light and sound is projected onto the palace showing an exposition of the past, present and future of the UAE.