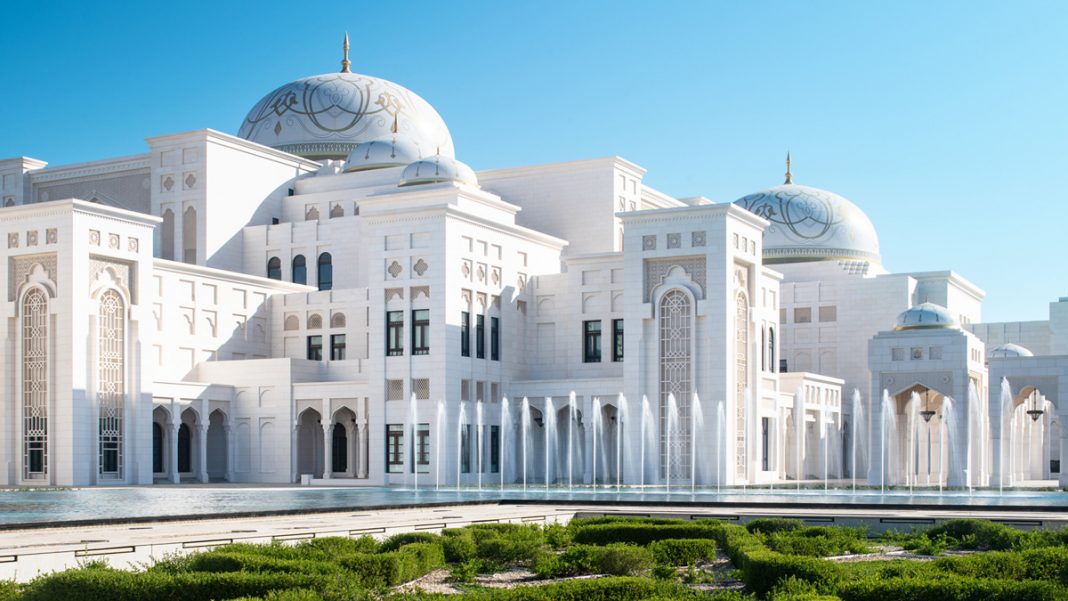 The United Arab Emirates has grabbed the attention of the world through its years of civilization and development. The Arab nation was characterized by a traditional setting which can still be referred to today.

The traditionalism has however, gradually bent to the wheels of the potters of civilization by allowing the birth of modern imprints into the community. The wonders of the past, coupled with those of today, have served as veritable sources of tourist attraction for the city and continue to be so.

Below are the top 10 architectural wonders of Abu Dhabi. 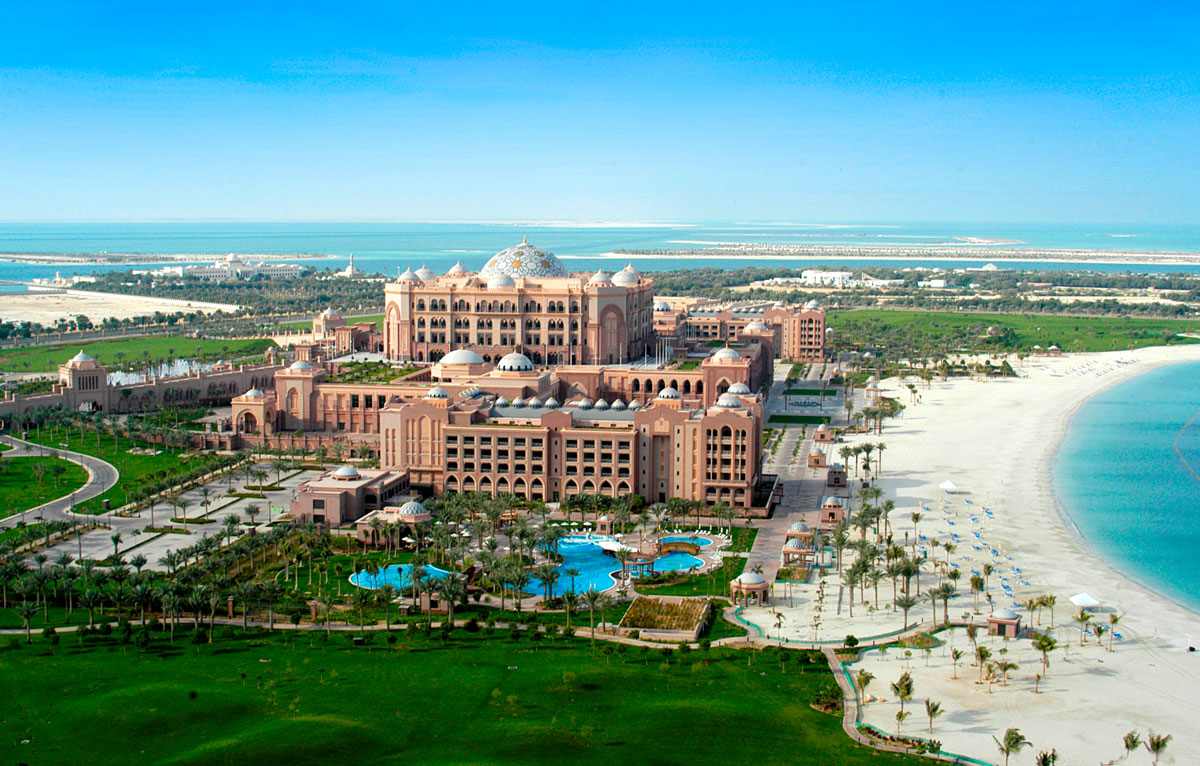 Owned by The Government of Abu Dhabi, and designed Wimberly Allison Tong & Goo, the Emirates Palace holds the number one spot on this list for some many reasons. The majestic edifice spans 84 hectares, housing 394 residences, including 92 suites, 22 residential suites, with its own private beach and marina. The utra-luxurious 5-star hotel cost a whopping $3.9 billion USD to build, making it one of the most expensive hotels in the world. 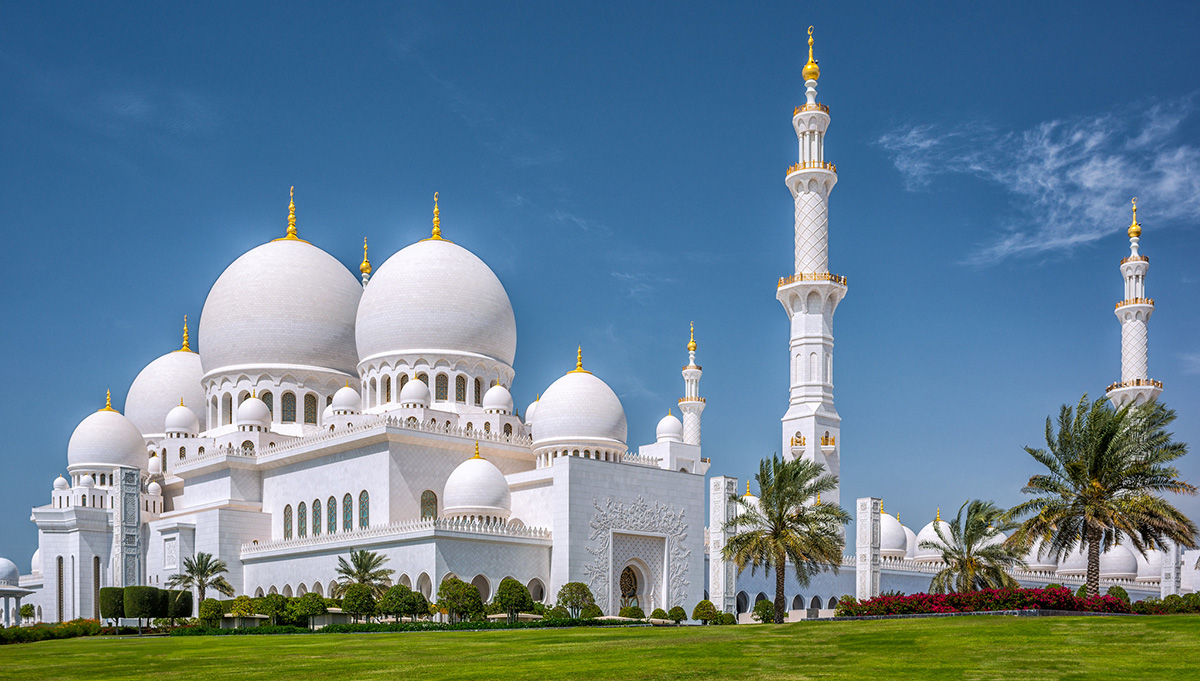 For starters, it is important to know that the Sheikh Zayed Grand Mosque in Abu Dhabi is the third largest mosque in the world. The majestic building is the hub of worship and spirituality in the country. Everything spent on the mosque shows that it is a marvel to behold. The exterior displays a dome layout with minarets and imposing stature, while the interior is designed with gold, marble, ceramics, crystals and stone. In order to fully explore this masterpiece, it takes a 90-minute tour during which you must be conservatively dressed. The Sheikh Zayed Grand Mosque was inspired by the Persian, Mughal, and the Alexandrian Mosque of Abu al-Abbas al-Mursi Mosque in Egypt, as well as the Badshahi Mosque in Pakistan. 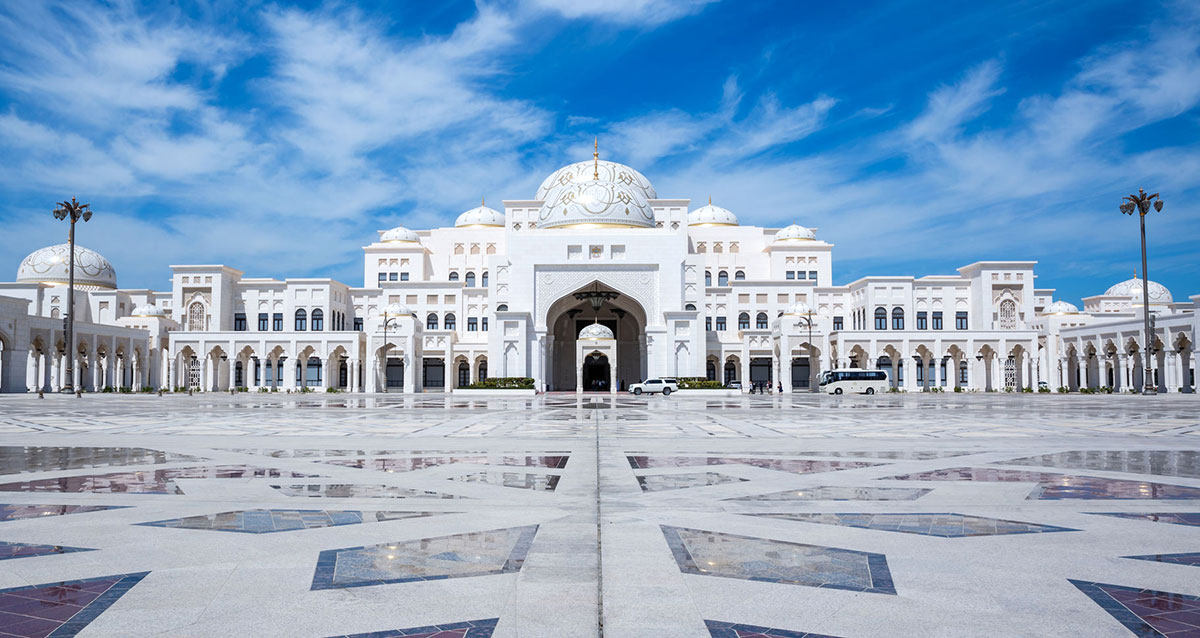 Qasr Al Watan which translates to Palace of the Nation in English, is the Presidential palace in Abu Dhabi, United Arab Emirates. This magnificent structure used to be an exclusive place for official matters and state functions like hosting foreign leaders of states, and for meetings of the country’s supreme council and federal cabinet, until it was opened to the public on March 11, 2019. Since then, it has become a tourist attraction and one of the best places to visit while in Abu Dhabi. It now combines the official purposes with serving as a means of showcasing the Emirates rich history to the world while serving as a hub of knowledge. Mostly donning white with intricate designs and ornate decorations, Qasr Al Watan boasts a facade made of white granite and limestone, and includes a central dome with a diameter of 37 m, a chandelier with 350,000 pieces of crystal, and a number of compartments. At the center is “The Great Hall”, which is surrounded by two wings to the east and west. The western wing accommodate halls which are used for official purposes, while the eastern wing accommodates the “House of Knowledge”, where a number of artifacts and other objects of importance are stored. Stored objects include gifts presented by visiting officials from other countries, the Quran and the Bible. There is also a library with more than 50,000 books which document the cultural, social and political history of the United Arab Emirates. 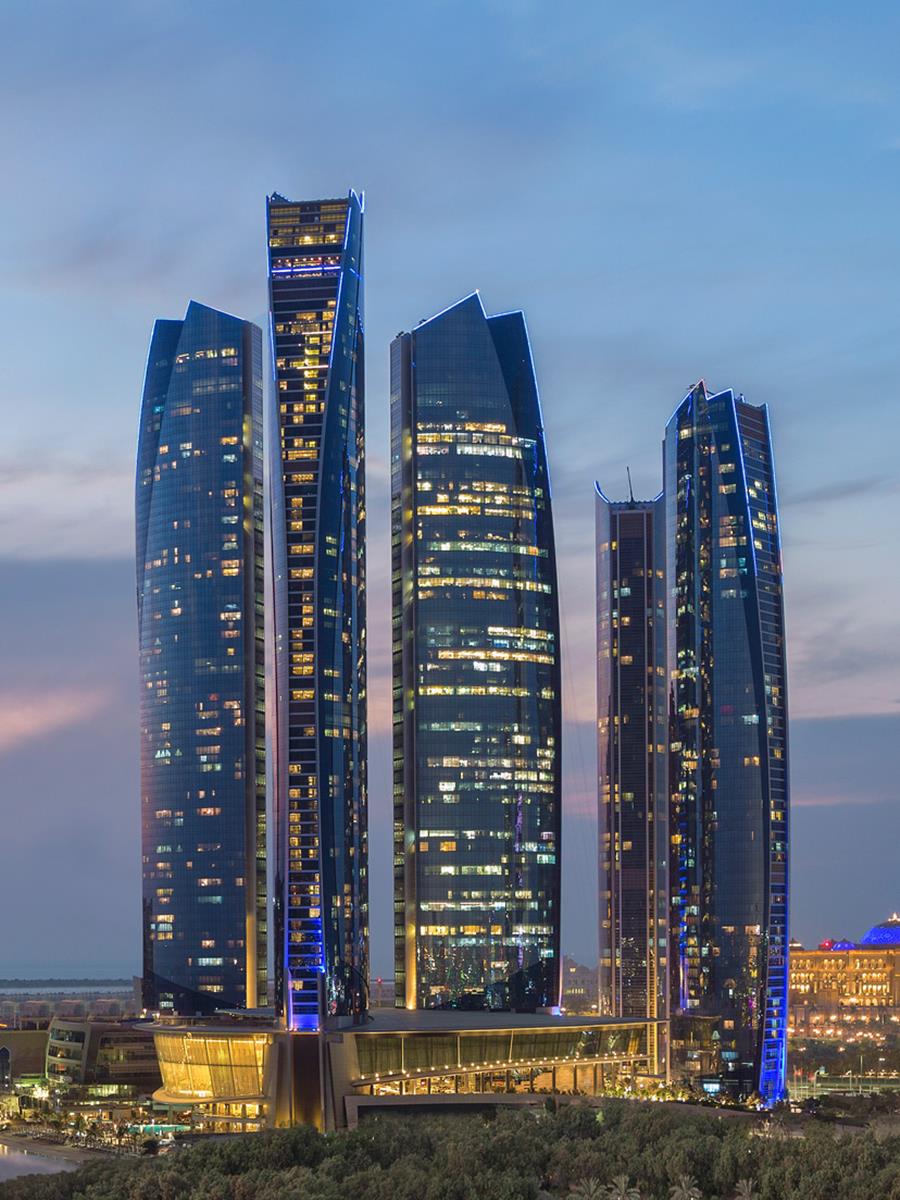 Opposite the magnificent Emirates Palace is another architectural masterpiece; the Etihad Towers. The similar looking quintet has three of them being residential apartment; one an office building; and the last a bar. Together, the Etihad Towers consist of 14 restaurants, international brands shops; and a sprawling ballroom fit for 1000 guests and more. The tallest tower is also designed with an observation deck, where visitors can enjoy excellent views of other wonders of the city including the Saadiyat Island and of course, the Emirates Palace. The five towers were constructed by the Sheikh Suroor Projects Department, after the design was made by DBI Design in 2011. 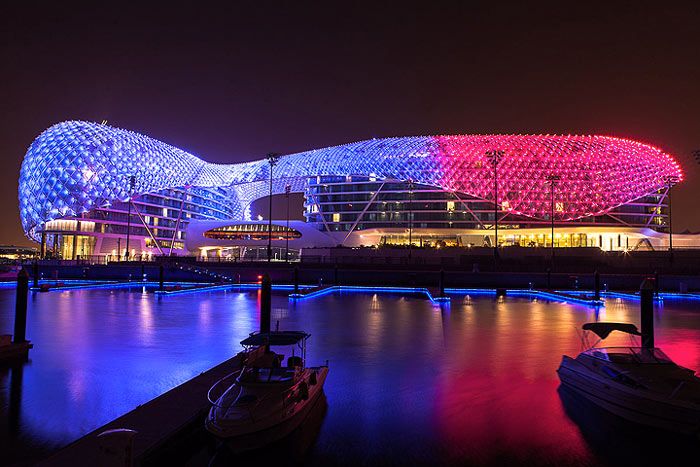 W Abu Dhabi – Yas Island formerly known as Yas Viceroy, is made up of two 12-story hotel towers built on an F1 race circuit. One of the towers is set within the race circuit while the other is within the marina; both linked by steel and glass bridge as well as the Grid Shell. The Grid Shell itself is a 217-meter expanse of crystal curvilinear glass and steel with an LED lighting system which incorporates video feeds to be transmitted over pivoting diamond-shaped, color-changing panes. This beautiful architectural and engineering wonder was designed by two iconic figures in Architecture; Hani Rashid and Lise Anne Couture. 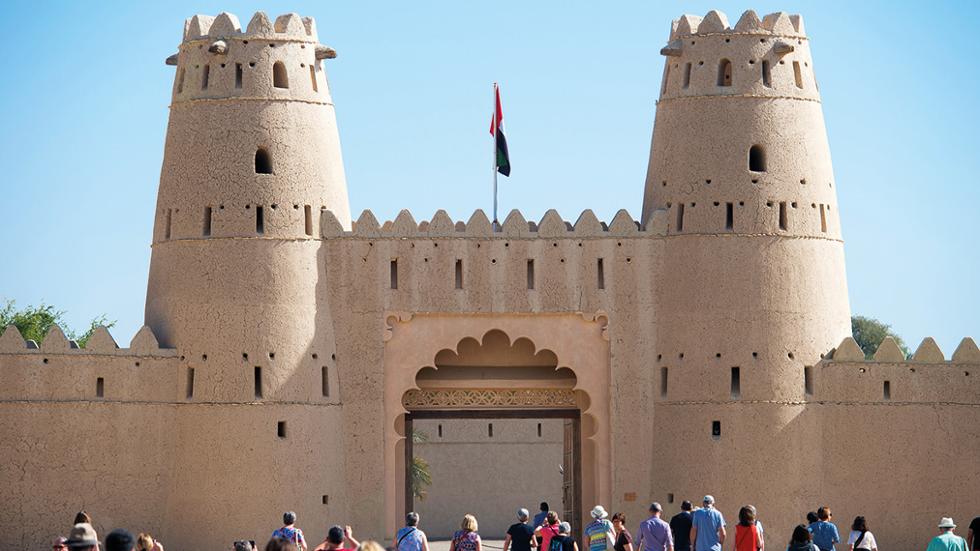 Another architectural wonder, which also has an historical influence, is Al Jahili Fort. It was built in 1891 to defend the palm groves and protect the mountain passes in order to ensure peace in the city. After undergoing renovations and expansions, it now serves as a cultural center, where a permanent exhibition is installed. The beautiful gardens give a welcoming aura to the architectural marvel. 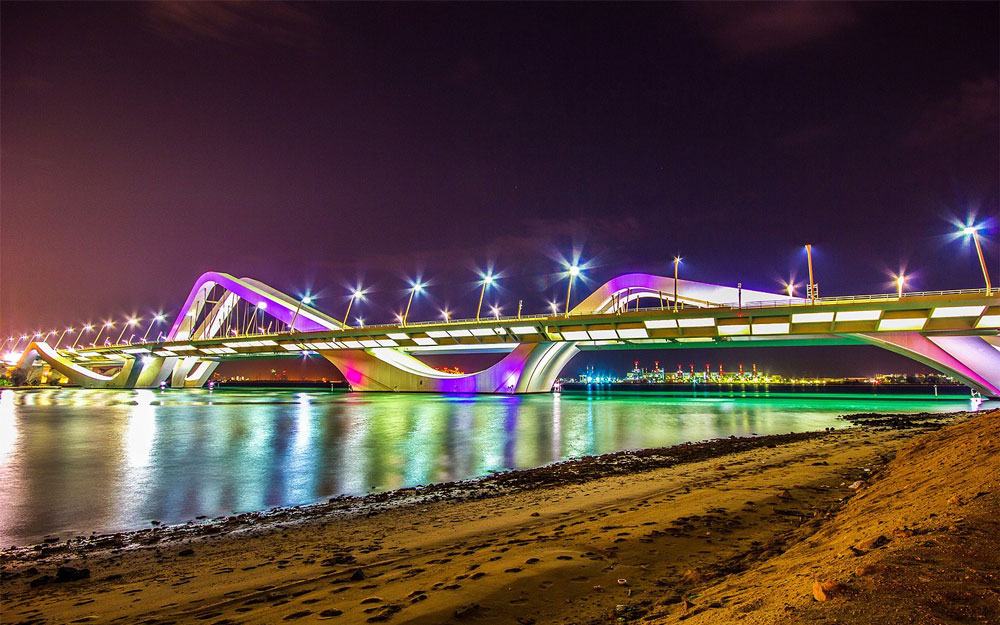 Designed by the legendary Zaha Hadid, the iconic Sheikh Zayed Bridge has been lauded as the most intricate bridge ever constructed. The bridge is 842 meters long with curved arches and enrapturing visuals. The bridge was meant to be a symbol of grandeur for the city, which is why Hadid incorporated traditional Islamic and Arab art styles into the jewel in the crown of the nation. 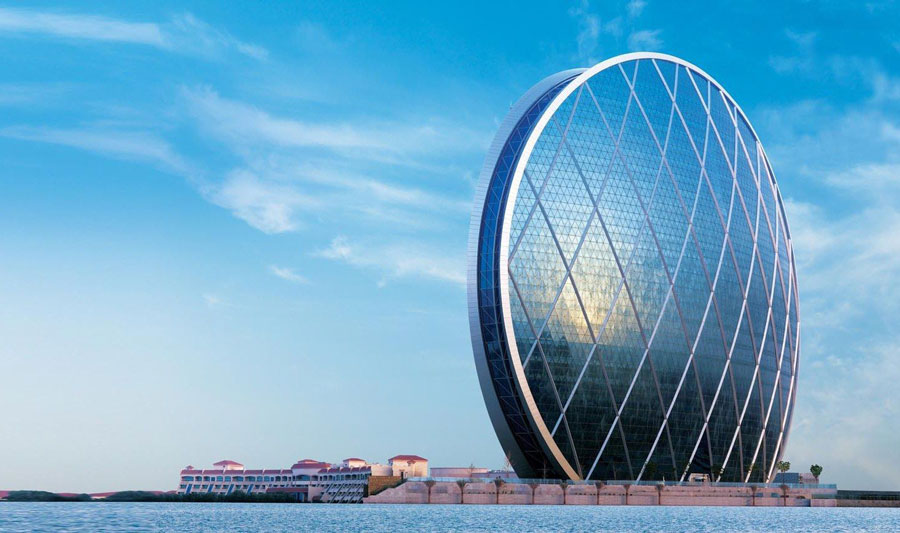 The Aldar Headquarters is not only a masterpiece in Abu Dhabi or the Middle East, but in the entirety of the world. The award-winning architectural marvel has been named the world’s first circular skyscraper and nicknamed “the coin” because of its outlook. Aldar Headquarters was voted “Best Futuristic Design” by the Building Exchange Conference in 2014. The building offers amazing views of the city, as well as the canal and the sea. 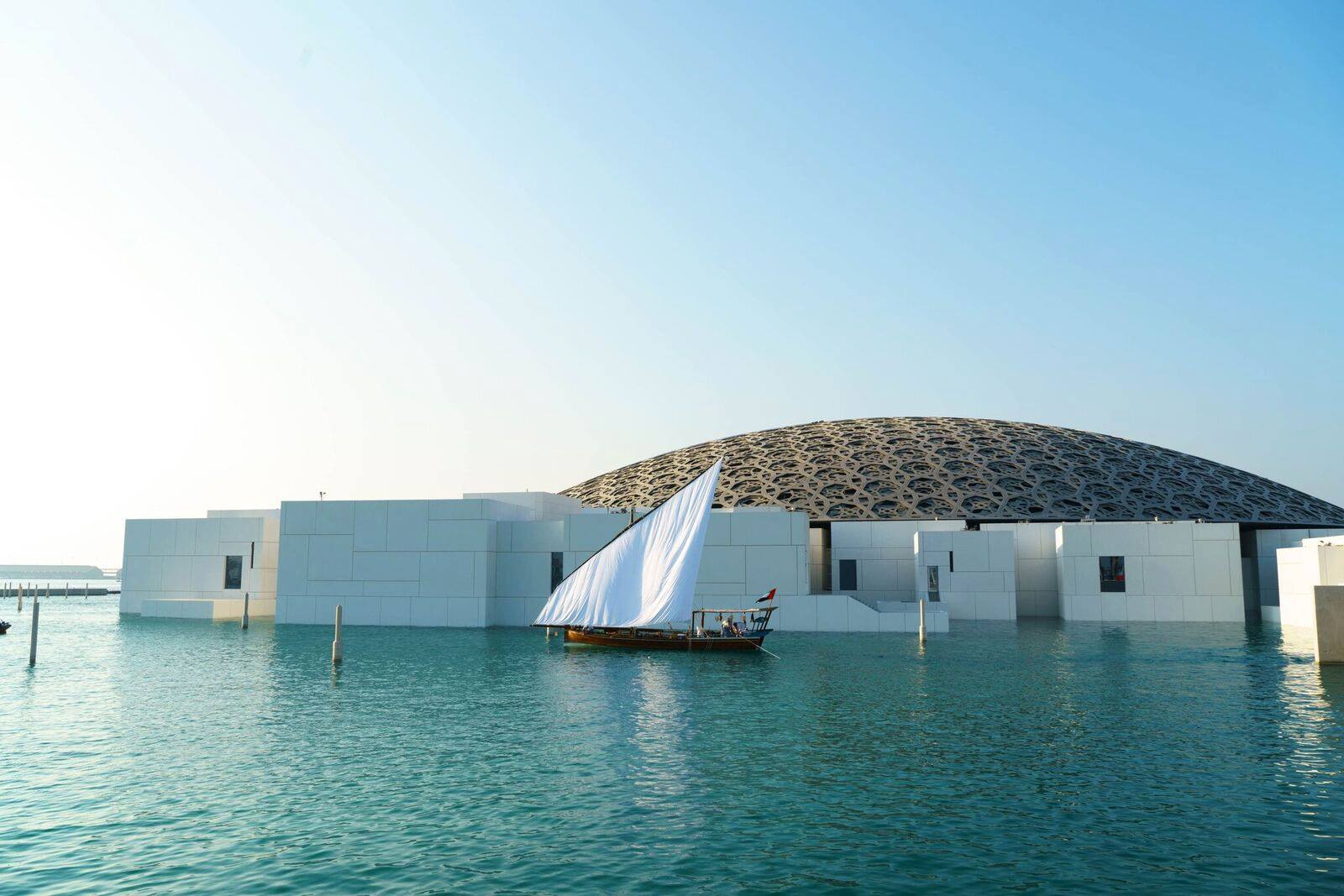 Designed by award-winning architect, Jean Nouvel, Louvre Abu Dhabi is an art and civilization museum located in the Saadiyat Island Cultural District. The museum spans 24,000 square-meters in size, with 8,000 square-meters of galleries, making it the largest art museum in the Arabian peninsula. The museum is part of a thirty-year agreement between the city of Abu Dhabi and the French government. It was inaugurated on November 8, 2017 by French President Emmanuel Macron, UAE Vice President Mohammed bin Rashid Al Maktoum and Crown Prince of Abu Dhabi Mohammed bin Zayed Al Nahyan. Artworks from around the world are showcased at the museum, with particular focus placed upon bridging the gap between Eastern and Western art. 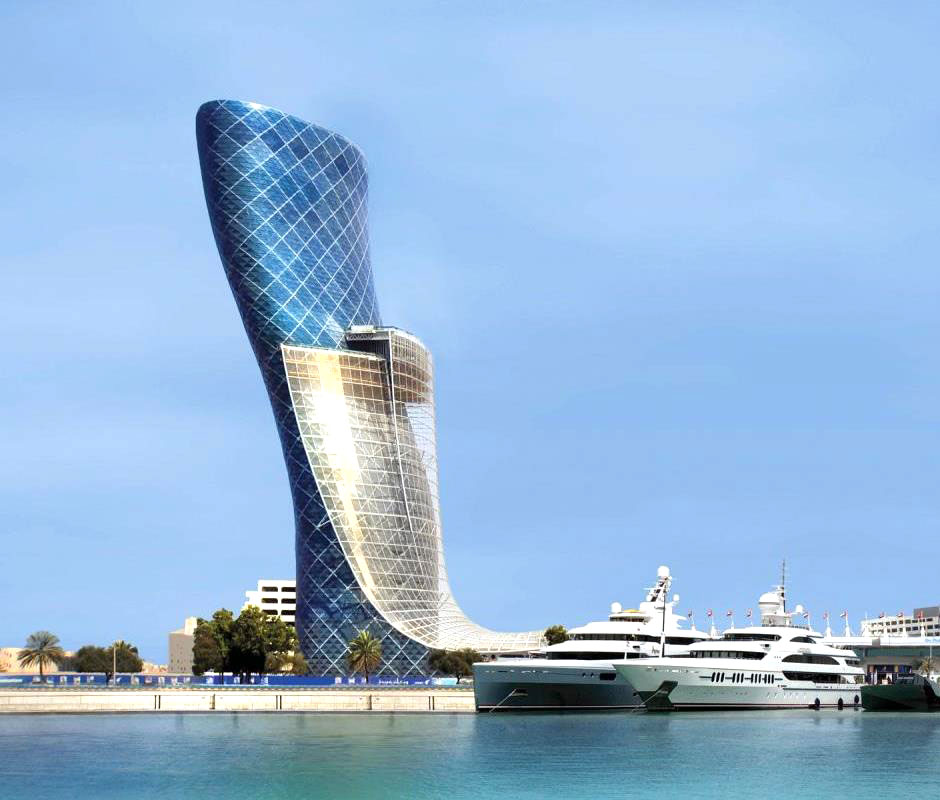 The first thing to note is that the Capital Gate did not just win awards and laurels; it also landed a spot on the Guinness World Record as the world’s furthest leaning man-made tower. Although, the inspiration for the design was gotten from the Leaning Tower of Pisa in Italy, the Arabian sibling leans four times as the elder sibling but boast more stability. Among its accolades is the title of “one of the strangest buildings of the year” which is justified in the 160 meters height of the building with 35 stories. It also leans 18 degrees to the West but is safely reinforced with a foundation of dense mesh and steel. This wonderful piece was designed by RMJM Architects.