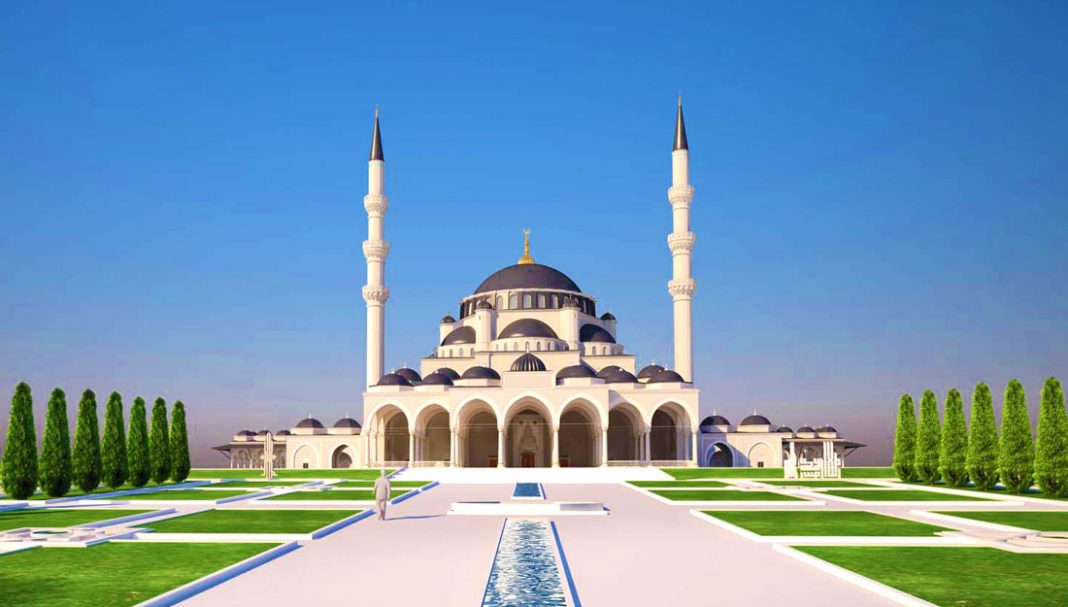 Sharjah may not be as popular as the most populous Emirate in the country (Dubai) or the largest Emirate (Abu Dhabi, which also happens to be the country’s capital) but the importance of Sharjah’s existence can never be underestimated as it is widely regarded as the country’s cultural heritage. What the Emirate doesn’t have in glitz and glamour compared to the two most popular Emirates, it makes up for with culture. The city is known as the cultural and literature hub of the entire country and it is deep-rooted in its Arabic and Islamic heritage.

That’s not to say the United Arab Emirate’s third-largest city doesn’t have beautiful attractions and architectural marvels like Dubai and Abu Dhabi. Sharjah literally offers its guests larger view into the Arabic and Islamic art, literature, and architecture, with many amazing buildings which can be found throughout the Emirate.

Sharjah is part of the Dubai-Sharjah-Ajman metropolitan area and the residents of this Emirate have easy access to Dubai because although they live in Sharjah, most of them work in Dubai.

Here are the top 10 architectural wonders of Sharjah. 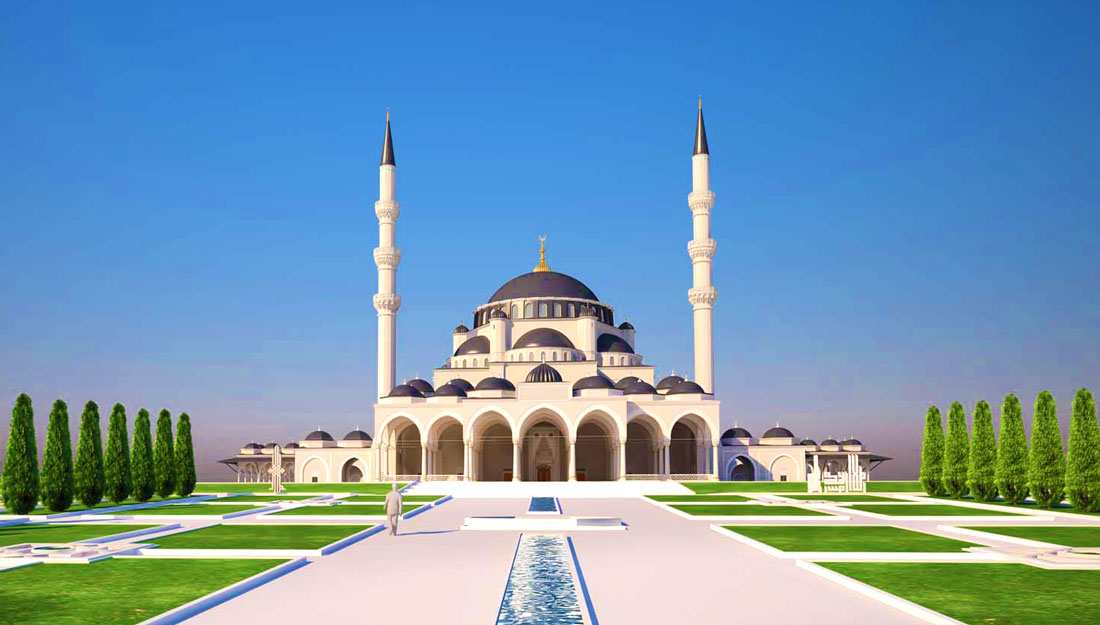 The Sharjah Mosque was opened to the general public last year (2019) after more than five years of non-stop work, costing about AED 300 million. The mosque is home to a large library that’s filled with lots of Islamic works including treasury of books and antiques from different eras. It is the biggest mosque in Sharjah with a capacity of over 25,000 worshippers and it features an amazing grandeur which attracts people from all across the country and beyond. The good thing is non-Muslims visitors. The main hall features arched windows with stained glass coupled with walls that contain verses from the Quran, and a large red carpet. 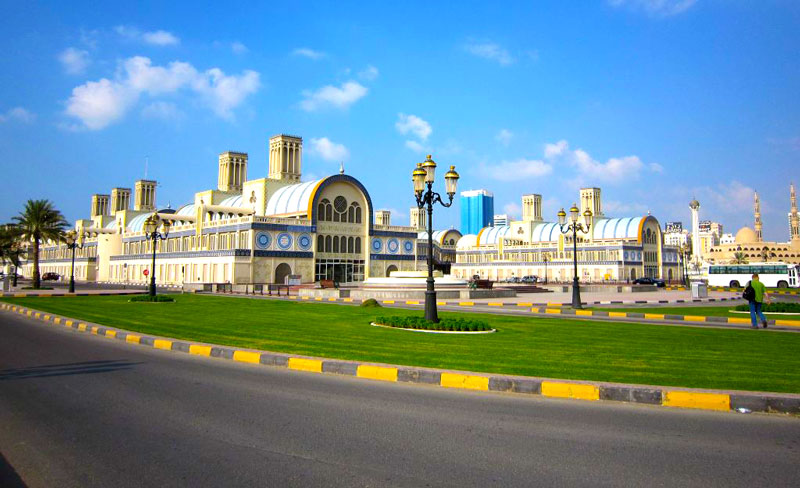 The Blue Souk is Sharjah’s main shopping hub and it is also one of the Emirate’s most amazing landmarks, with people from all across the country trooping into the city to enjoy the impressive beauty of this Souq. Under the guidance of HH Sheikh Dr. Sultan Bin Mohammed Al Qasimi, the ruler of Sharjah, the building was designed by renowned British architects, Michael Lyle & Partners. The building amasses a total area of 80,000 s.q.m and consists of more than 600 shops where you can get gold, jewelries, perfumes, clothes, cosmetics, and many more. 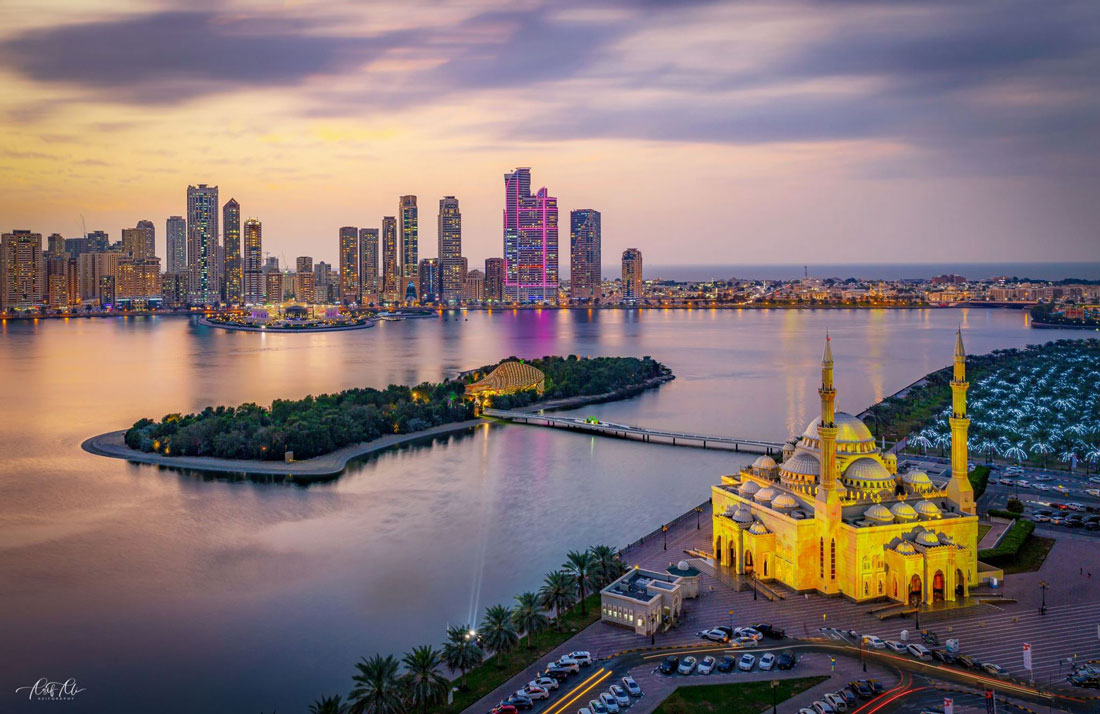 Al Noor Island is one of the best places to visit not just in Sharjah but the United Arab Emirates in general. The island’s design was inspired by nature which is why it is filled with natural-looking things, and an atmosphere that’s always very peaceful. The garden in the Al Noor Island is very beautiful and you can create enough beautiful memories for yourself just by walking in it. Since its opening in December 2015, the island has scooped so many awards for being a true architectural wonder. It won the IF Design Award in 2017 and German Design Award in 2018. 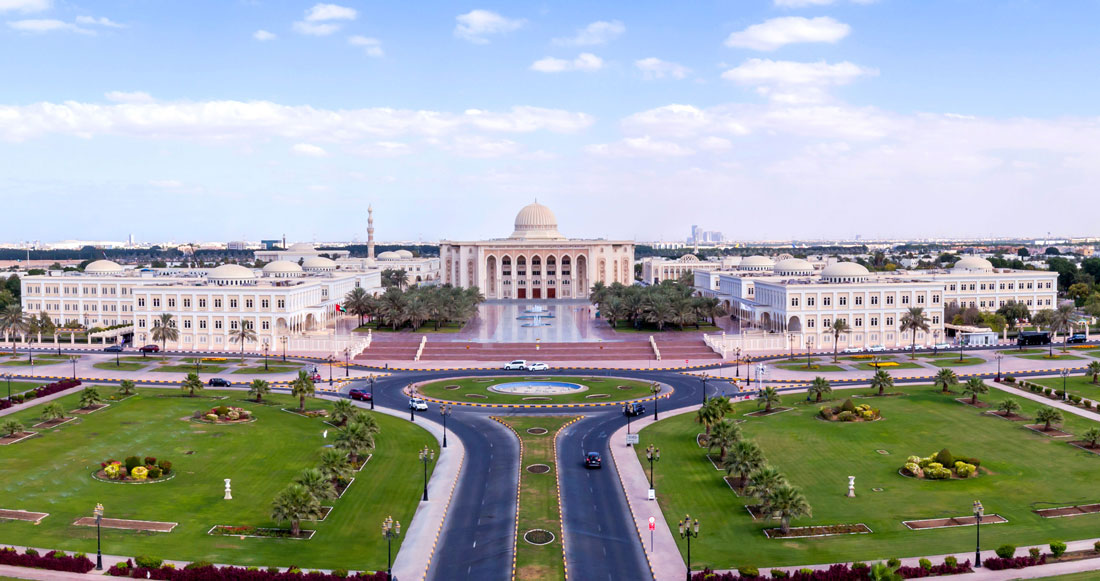 The American University of Sharjah has been one of the best-known and most respected universities in the whole of Middle East since 1997 and while the university is globally respected for its academic excellence, the architectural structure of this school cannot be in anyway overlooked as it still ranks as one of the best in Sharjah. 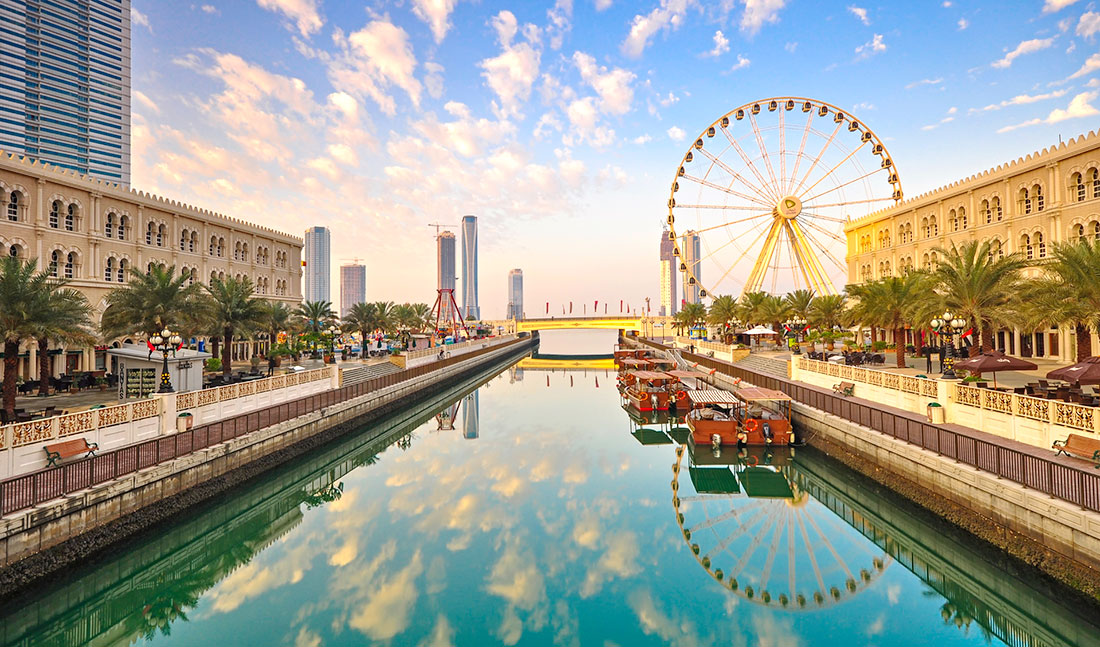 Al Qasba is located in the Al Majaz area, the canal that connects Khalid Lagoon and Al Khan Lagoon; and it is one of the most popular places in Sharjah, known for being a beautiful tourist center. Families love to go to this place with their kids because asides from boasting of amazing picture-perfect spots, it is also children-friendly. The Al Qasba’s theatre hosts numerous cultural events throughout the year and it brings people of Sharjah together when it’s time to celebrate Eid. 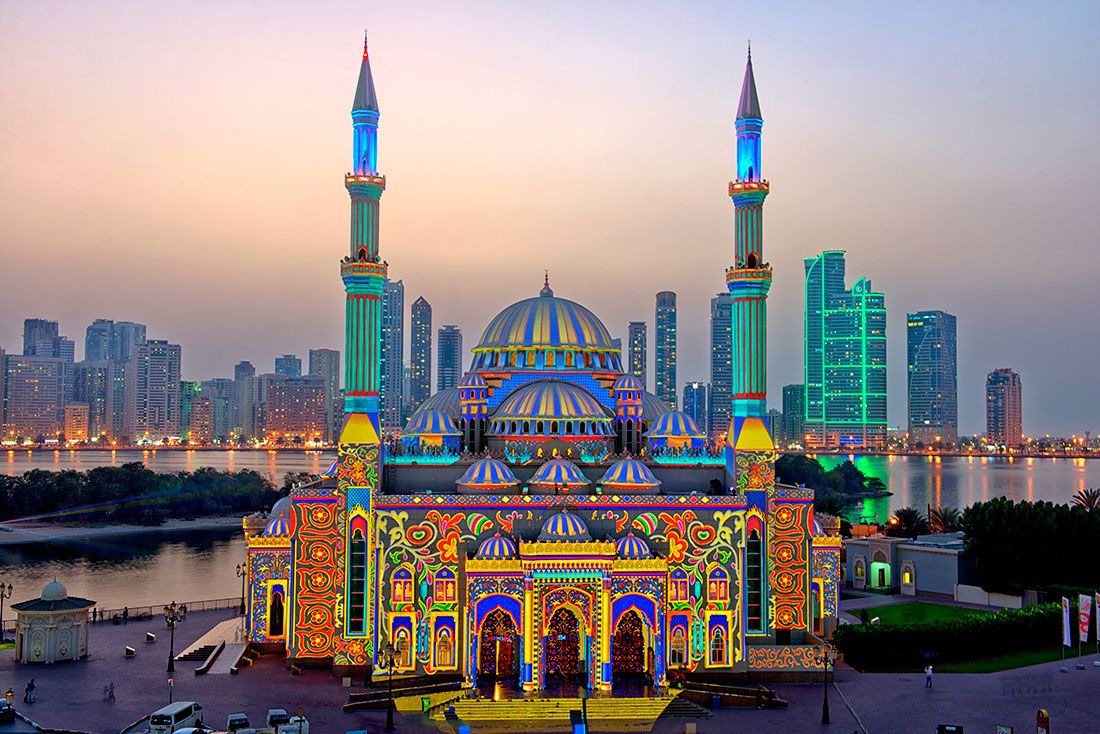 Al Noor Mosque got the global attention when it set a Guinness World Record for having the world’s largest wooden charity box in 2014 for their Ramadan donation campaign. The truth is way before the global attention; the people of Sharjah had always cherished this mosque for not just being a place of worship but a truly stunning example of Islamic tradition and design. Al Noor Mosque is one of the most beautiful mosques in Sharjah, and also the first mosque to welcome non-Muslim visitors. 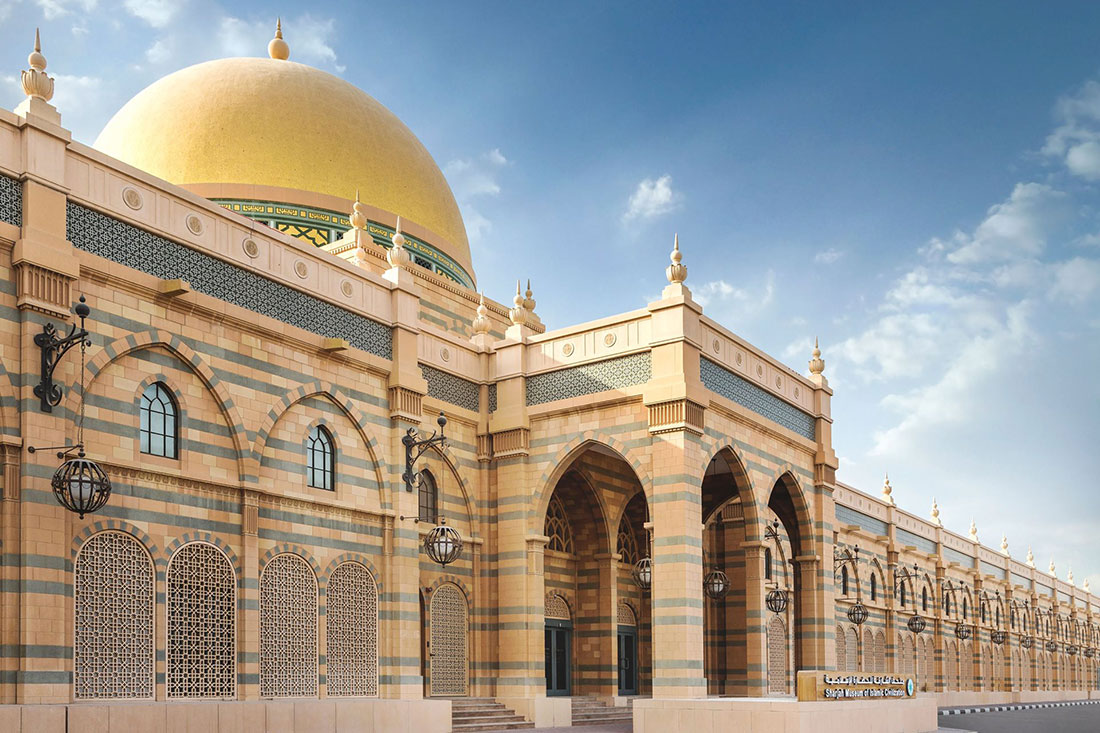 The museum that was opened in 2008 is located at the Majarrah Waterfront opposite the shore of the Sharjah Creek. The site of the museum used to house Souq al-Majarrah which was later reformed into a state-of-the-art museum. The museum houses over 5000 artifacts from all over the Islamic World are always on display in the large galleries all across the museum. 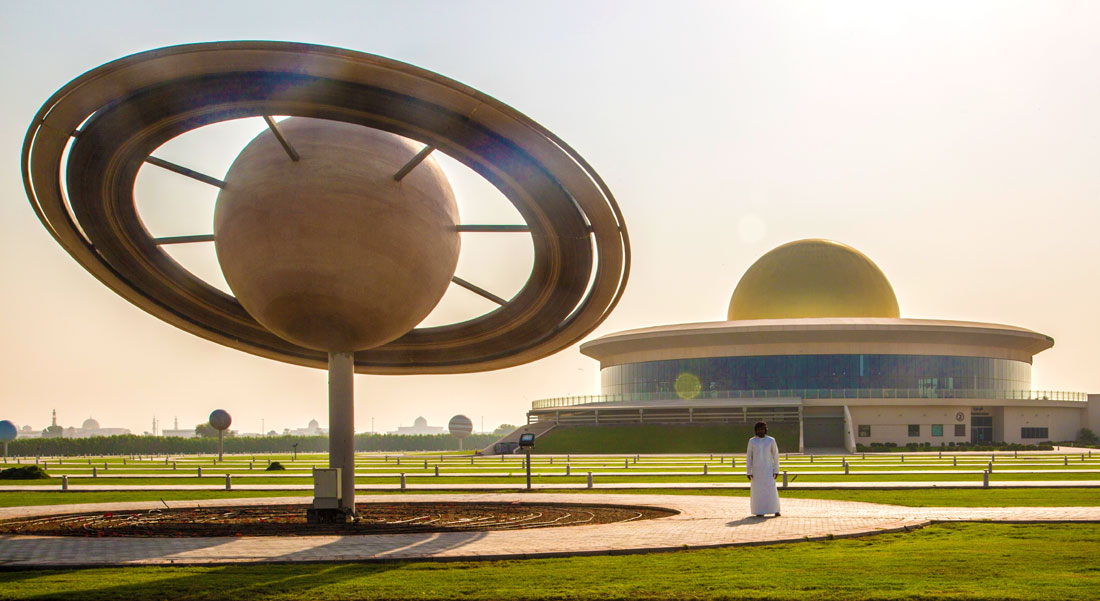 Sharjah Center for Astronomy & Space Sciences (SCASS) has been described by many as one of the best science museums in the whole of the Middle East and it’s not only known for its scientific exploits but also its great architectural structure which is also one of the best in the country. People have the opportunity to have a glimpse of what the space might look like with amazing collections of the space. They also get to experience countless experiments which give them something to hold on to if they have a dream of pursuing a career in astronomy. SCASS is just a complete package. 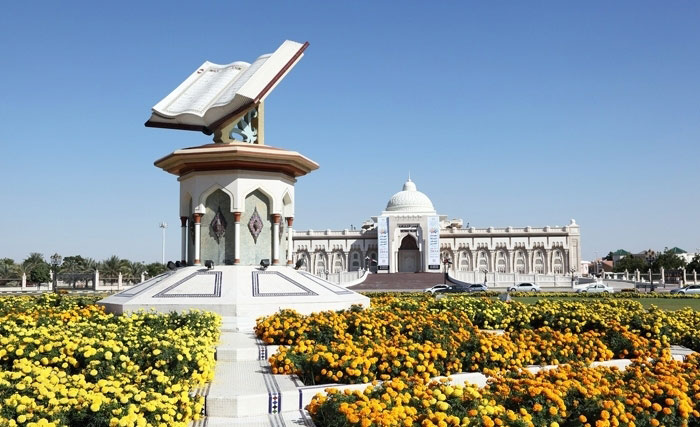 What’s most amazing about Sharjah’s Cultural Square is that is has the Holy Qur’an at its center and also surrounded by amazing landscape gardens. The building was designed by the popular Spanish sculptor, Carlos Marinas Rubias, and it represents the spiritual heart of the city. 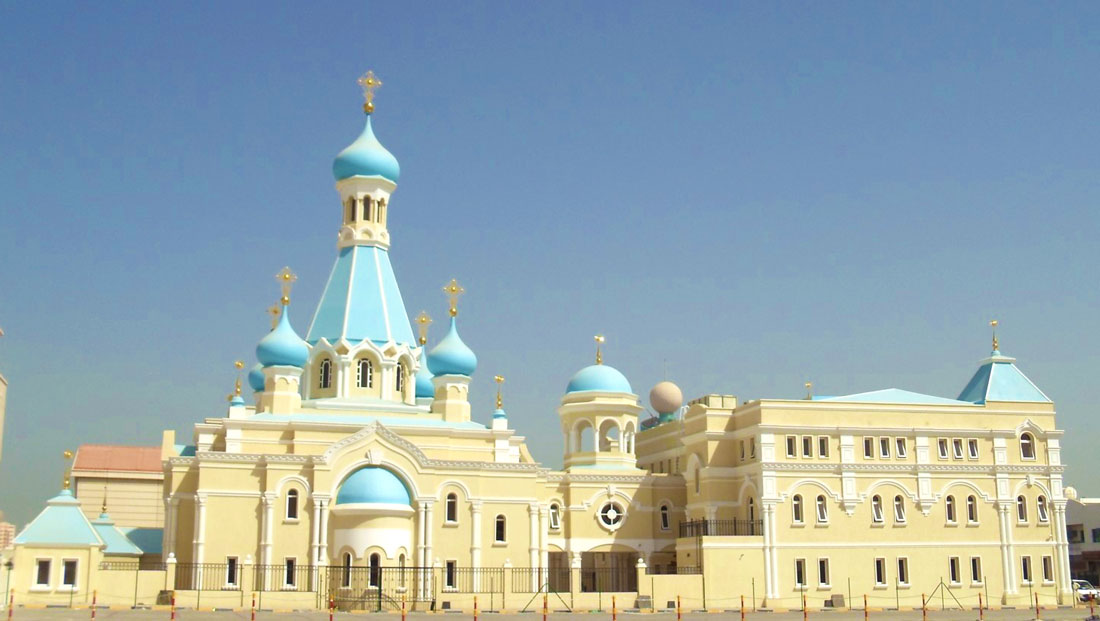 Russian Orthodox Church is the UAE’s biggest church and it is just a 20-minute drive from Dubai. The church can take up to 20,000 worshipers and it records those numbers on holidays. It features beautiful ornate blue domes and rich symbolism which can be found right inside the church. 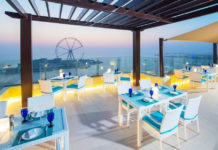 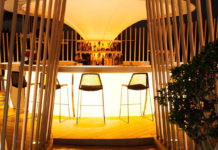