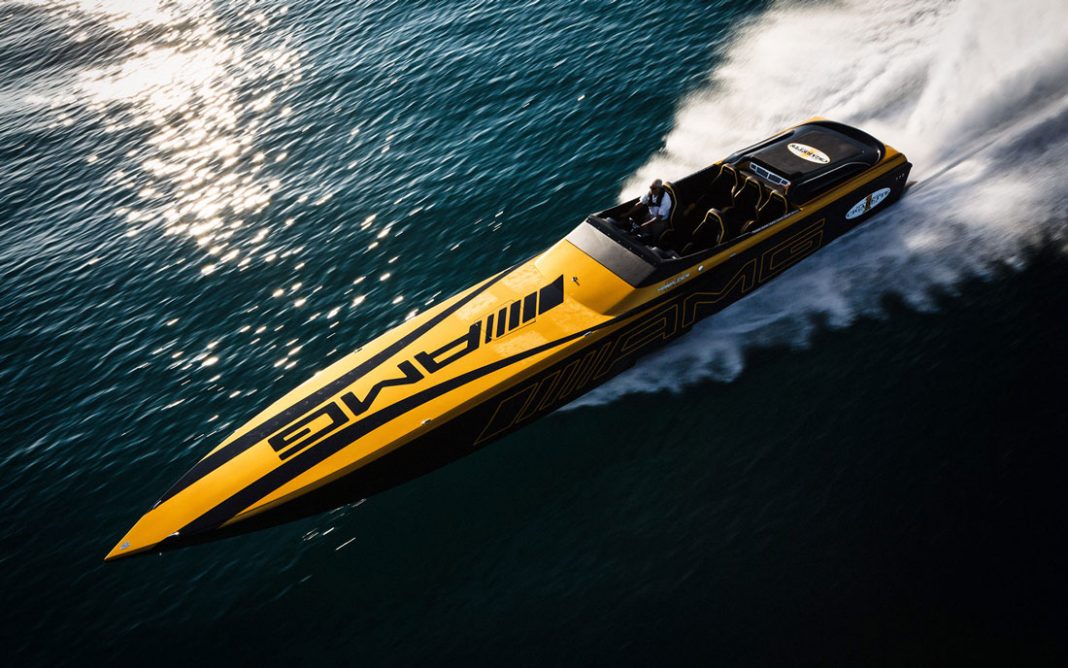 Human beings have a thing or two for fast things, be it cars, jets, bikes, anything at all, as long as it’s fast and boats cannot be taken out of that list. People have heavily invested in fast cars, for example the highly successful Tesla Model X, or perhaps some Kawasaki Ninja sports bike. Human need for speed has never been swept under the rug, and it’s not likely to be; for the next couple of decades at least.

If you’ve ever wondered if fast boats also exist, like fast cars, bikes and jets do, you are very right to think they do. In such a tech-driven world that we’re in today, the list of possibilities just never ends, and you’ll find it amusing that the most absurd things are being made real by technology. Over the years, boats have become increasingly important, just as important as the other modes of transportation; and performance boats with surreal speed have been gaining a lot of attention as well.

Hence, we decided to put together our list of the top 10 fastest boats in the world in 2021. 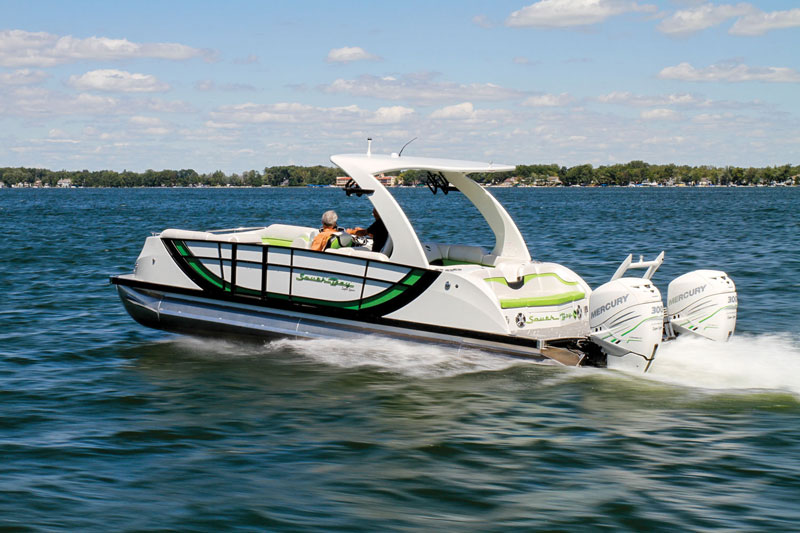 The South Bay 925 CR is an amazing pontoon and still currently holds the record for the fastest pontoon in the world in 2021. Its top speed stands at 114 mph and if you are a fan of portable and not-too-large type of boat, the South Bay 925 CR is an ideal boat for you. It features a manual sport arch, 4-speaker Bluetooth stereo, interior and exterior LED lights, all making it perfect an enjoyable for fun sails. 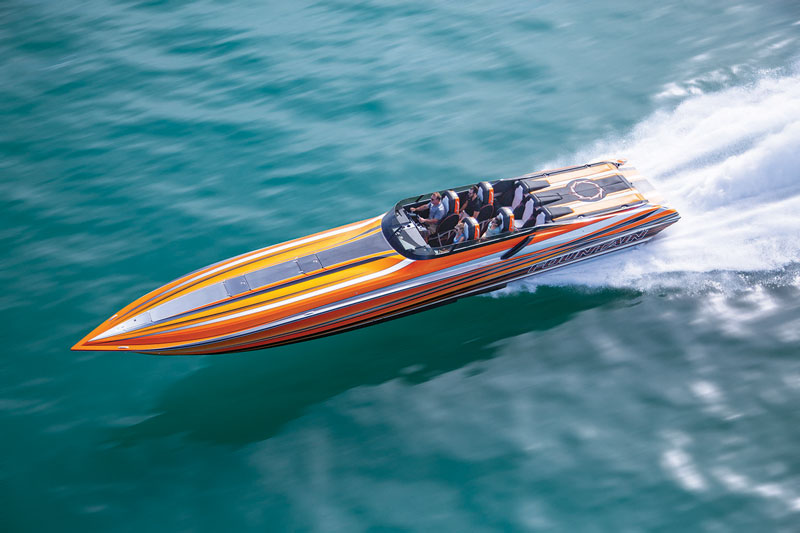 With a capacity of taking four to six people, the Fountain 47 Lightning boat has lived up to its name because it is lightning fast. It runs on twin Mercury Racing 1075 horsepower engines which help it reach its top speed of 125 mph comfortably. The standard features on the boat include a Garmin GPS, Vessel view instrumentation, and LED push-button switches on the navigation board. 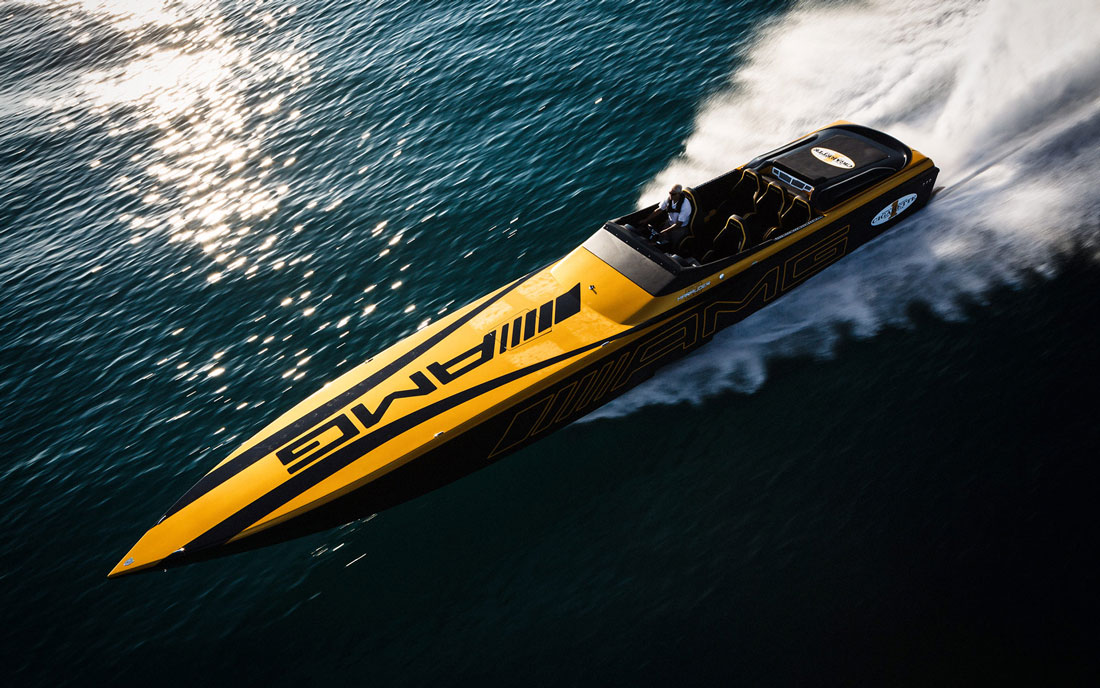 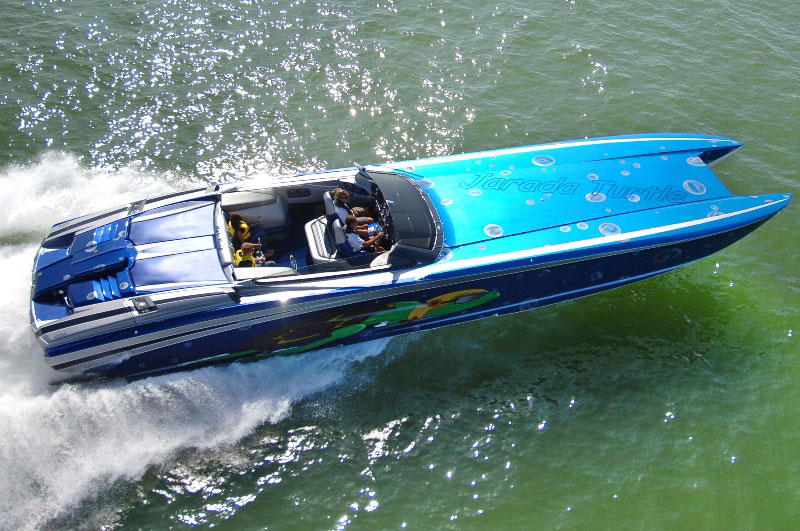 The Nor-Tech 5200 Roadster is also one of the most powerful boats out there, coupled with the fact that it can also hit a top speed of 150 mph comfortably. The performance boat features a 400-gallon fuel tank, 5400 hp engines, and amazing luxury feel like a padded sun lounge, swimming platform with boarding ladder and aft facing seats. The Nor-Tech 5200 Roadster is a complete package and it is one of the best – not just one of the fastest right now – which money can buy. 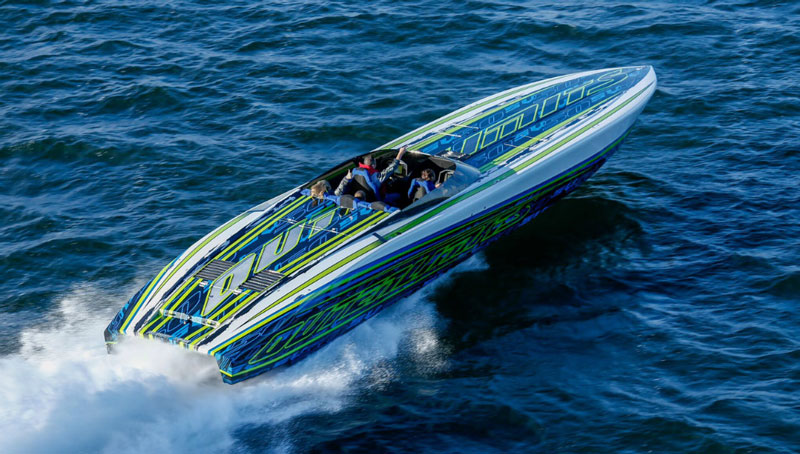 The Outerlimits SV-50 is one of the Outlerlimits’ fastest and most powerful powerboats which has been designed for rugged performance, and that’s exactly what you’re going to get when you get to own this particular version of Outerlimits’ production. The boat’s cockpit features things like the dual helm controls, and a more important standard GPS chart plotter. Powering the 250-gallon-capacity speedboat is a Mercury Racing 1550/1350-horsepower twin engine which produces 156 mph. 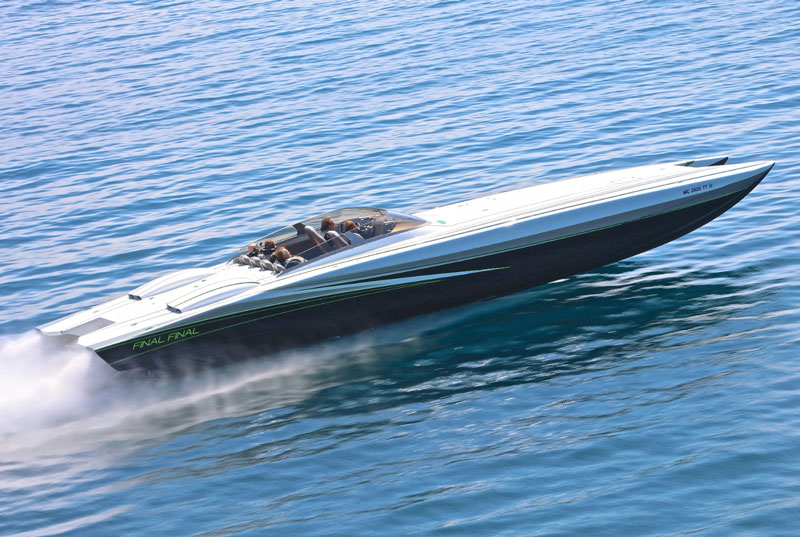 The Skater 46 is a luxury catamaran that has been described as the Rolls Royce of powerboats by the manufacturer, Skater. The boat is powered by a twin Teague Custom engines of 1500 hp each which gives a maximum power of 3000 hp from combined efforts of both engines. The powerboat is one of the fastest boats available today with a top speed of 175 mph which is greatly complimented by the luxury interior feel which includes a complete stereo system and very tight air-conditioning. 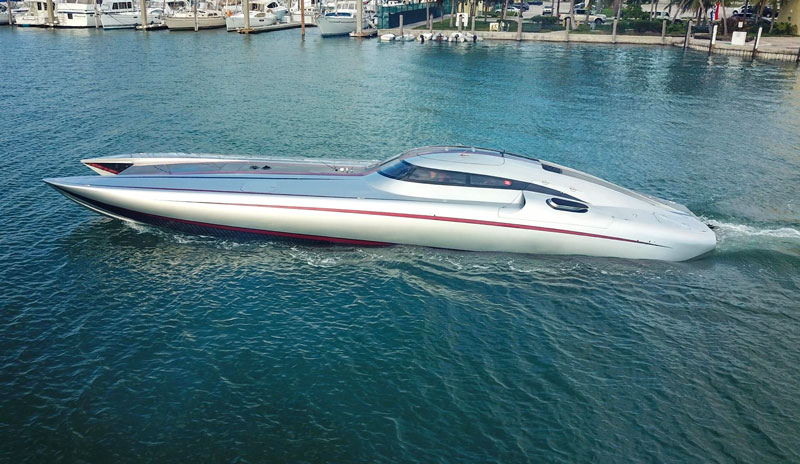 The most amazing thing about the Mystic Powerboats C5000 Turbine is its fuel capacity that can take up to 600 gallons. The powerboat is powered by a combined 3700 hp engine (1850 hp apiece) and has its highest speed set at 250 mph which is more than amazing for a boat of its caliber. The Florida-based brand, Mystic Powerboats, is known to always produce nothing short of the best and that’s exactly what it has done with the C5000 turbine. 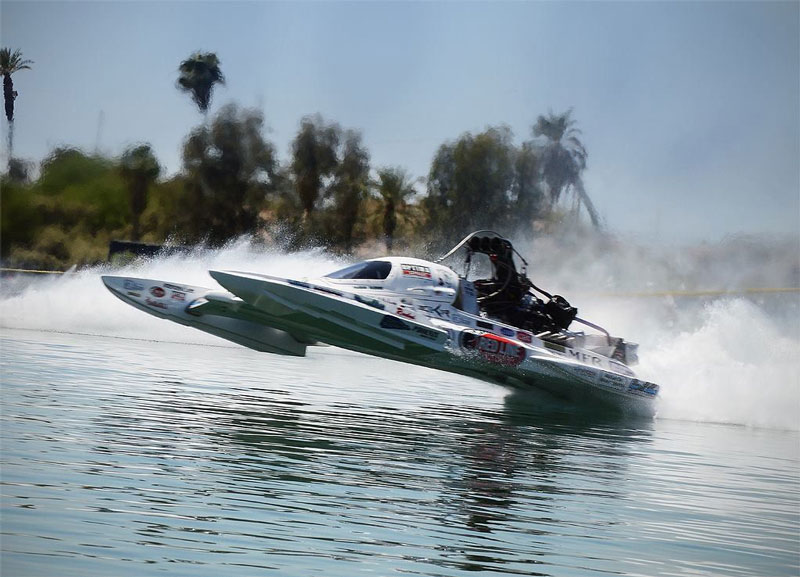 Designed by Eddie Knox and Larry Bless, the Problem Child is powered by a super-powerful engine that produces an insane 8000 horsepower, also allowing it to hit 262 mph top speed in just 3.5 seconds. It currently is the world’s fastest nitro drag boat and that is because its speed when it graces the water is really amazing and it always seems to fly anytime it’s in action. 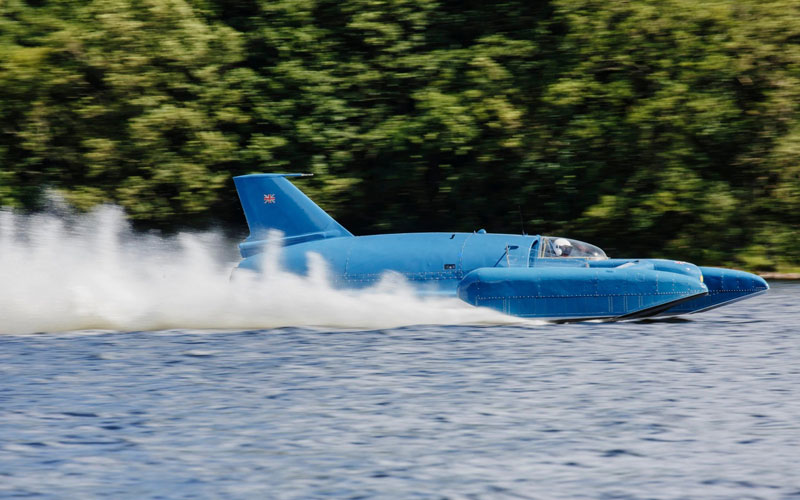 The Bluebird K7 once also held the record for the world’s fastest speedboat when it managed to maintain a top speed of 276 mph. Designed by Donald Campbell who died trying to record a speed of 300 mph with the same boat, beating his own record in the process but that didn’t quite happen. Not many boats can achieve that speed feat. 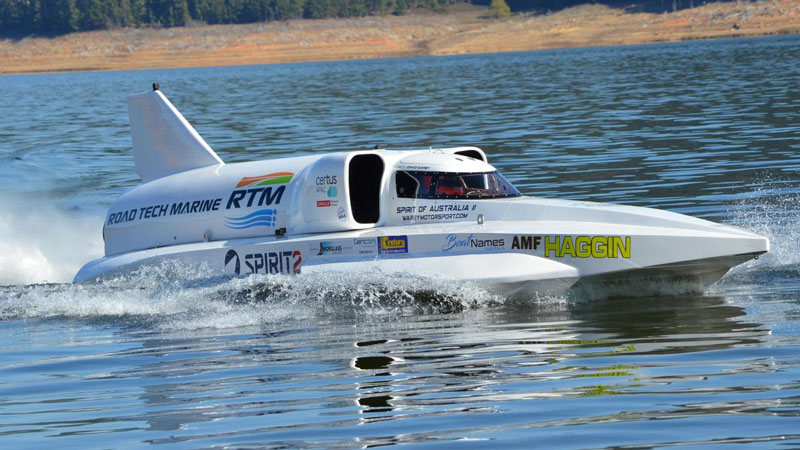 The Spirit of Australia is the fastest boat in the whole world in 2021. This boat was designed by Ken Warby in his backyard in Sydney and at the time of its record-breaking run, it was powered by J34 jet engines which allowed it record an estimated speed of 317.6 mph which till this moment, no other watercraft has been able to top this performance. The unlimited hydroplane is now on permanent display at the Australian National Maritime Museum where people can go and see the boat that made history for itself.